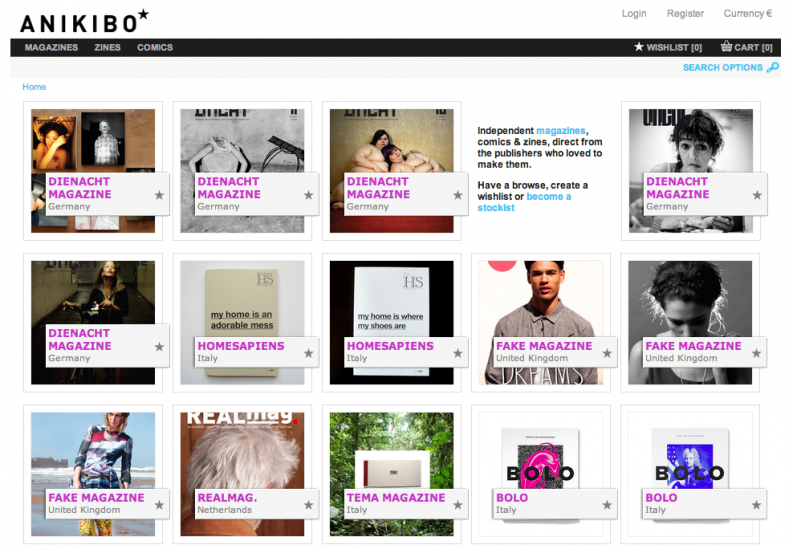 Anikibo founder Deborah Causton believes careful curation of content will be the key to her site’s success. BERLIN: The perennially looming Death of Print notwithstanding, there’s still a lot of ink and paper about. In particular, print remains prestigious in the boutique realms of independently produced magazines, zines and comics. The problem is how to find what’s out there. From the maker’s site? An art gallery in Leipzig? Some hip clothing store in Brooklyn? Deborah Causton is the Berlin-based British expat behind the recently launched Anikibo, a “peer-to-peer online marketplace specifically for independent publishers making, creating and publishing beautiful physical magazines, zines & comics.”

With an initial catalogue of titles from eight different countries from across the globe in categories ranging from photography and illustration through to kids and science, Causton has big plans for her brainchild. Recently Publishing Perspectives caught up with her to ask a few questions.

“The ‘Death of Print’ makes for a good headline,” says Deborah Causton. “But it seems to encompass a whole myriad of print outputs under one title, without actually breaking it down into printing sectors. Newspapers fundamentally work better digitally. It’s news, generally you want it freshly delivered. This is not the case for magazines or zines, especially those that have a story to tell, and it’s not just what has been written but the way it has been produced.”

Online, Causton says, “it’s difficult to maintain a clear avenue for the things we are looking for.”

Thus in the press release announcing the launch of Anikibo, Causton declared that the time was right for a “print revival.” Through Anikibo she seeks to make that revival global — on the site customers can find a Baltic Comics anthology from Lithuania, apocalyptic “street art” in Germany’s X1 Editions, or intellectual journals such as England’s The Modernist. Thumbnails allow browsers to view the lavishly produced interior contents, while a few clicks can add no end of purchases to your basket.

It’s an impressively designed site and easy to use; Causton has both run a magazine and spent the best part of a decade building websites, so she understands well what she wants from such a marketplace. But given the focus on “independent” creators and producers, what’s to stop Anikibo from becoming just another dumping ground for the infinite swamp of self-published mediocrity to be found on Lulu or languishing deep in the bowels of Amazon? The answer is simple: curation.

“With the advent of the internet we obtained an excessive access to everything, it’s difficult to maintain a clear avenue for the things we are looking for. Curation has always helped to whittle down a selection — now it probably matters more than ever. I wanted this for Anikibo, to avoid that “giant swamp of mediocrity.” The site will be a reflection of what I like and so as curation suggests you would have to generally agree with my taste, but the common rules for submission are that it is not an ‘ad-carrier’ and that it is a project made of passion for the art form.”

Causton financed development of Anikibo herself and currently comprises the entire staff:

“It’s basically me working on it, I had developers build the platform but I funded it from my savings and run it. The site works on commission sales, which we take from the cover price when a title is sold.”

“Stockists” are invited to get in touch through the site, or readers can recommend titles. Although her original catalogue comes from eight different countries, she sees no reason to stop there. Indeed, she is interested in:

“…all countries, everywhere…I’m pretty indiscriminate when contacting people, but with the language barrier I have to accept my first ‘zones’ will be English speaking ones. My intention was always that it would be a global platform and shipping must be made available globally.”

But, given her emphasis on selling lovingly produced art journals, might not the vagaries of the creative temperament get in the way of business? Can she really rely on all those bohemian types dotted around the globe to get out of bed in the morning to take their hand-stitched zine to the post office when there is so much sleeping to be done?

“I feel part of the selection process will sift some of these types of creators out. If a publisher is taking this seriously, even if it is just a means to a creative outlet, then they should hopefully want to act business responsible. I, of course, have the power to kick titles out if they repeatedly cause problems!”

Caulson has no particular favorites so far:

“I consider all the titles we have to be highlights, mostly because one day I send an email out of nowhere and said ‘hey…blah blah blah,’ and those that you see there now said ‘oh cool, where do I sign up?’ That was so rewarding having worked silently on building the platform for so long to get such a positive response having come somewhat out of nowhere.”

Meanwhile she is listening closely to her users as the site develops: “Creating features that will help users find what they are looking for or suggesting things will be one of the major avenues of development. I have so many ideas here, but I will wait for some feedback before I start to prioritize — my learning’s in ecommerce is that you should always listen to what your users want!”

Trying to Revive Print Through Digital

Is it a paradox to use the latest digital tools to revive print? Not at all, says Causton: “I see the revival very much centered on nostalgia and from that a rekindling of romance with printed matter.  This should be addressed though with an up-to-date distribution channel…for that reason I would say it is just pragmatic.”

Indeed, she adds, just because one technology is new and exciting, this should not distract us from the advantages of others we have enjoyed for centuries:

“Times have changed, we have huge advancements in technology and realize we need to adapt or face fading away. But it will be a sad day when we don’t acknowledge the range of technologies, and the history that goes with them, when we totally forget entire art forms or creative production lines which have taken centuries to develop. Imagine a world without permanent ink or a tangible outcome… digital, and the endless ability to tweak, will never give you that!”