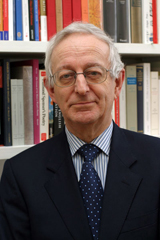 The French are sometimes accused of being cultural xenophobes — I mean, honestly, who else would dare to challenge the right of Google to digitize all their cultural treasures?

Okay, I kid. But sometimes they surprise you. And this past week, l’Académie française has elected an Englishman to join their august company: the polyglot man of letters, Michael Edwards was voted in on his third try, the first such Englishman to attain the honor of becoming of the 40 living French “immortals.”

As Le Nouvel Observateur puts it, “Michael Edwards is a man who knows more than a little literature. He is a poet, critic and translator. He did his thesis on Racine. He knows Shakespeare as well as he does Rimbaud…He taught comparative literature at the University of Essex and Warwick until 2002. He has been a visiting professor at many other universities, such as Paris-XII, Budapest, Johannesburg, Belfast.”

And, naturally, the newspaper notes that he is also married to a Frenchwoman.