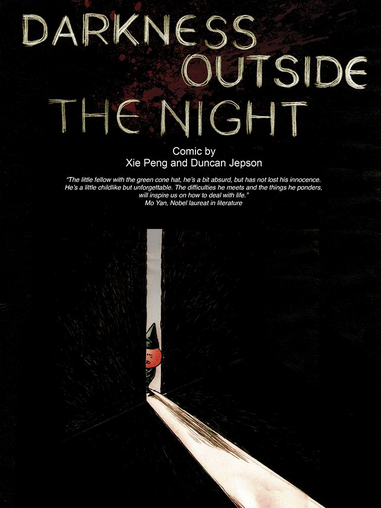 Printed graphic storytelling is an extension of all that has been performed for centuries across Asia. HONG KONG: Over the last few months there’s been a fair bit of editorializing, some of it appreciative, some not, about the nomination of Days of the Bagnold Summer and Dotter of Her Father’s Eyes for two of the shortlists of the Costa Book Awards, the latter ultimately winning the Biography category. Much of this discussion has centred around the question of whether graphic novels, or comics as some people prefer to describe them, deserve to be taken seriously as a literary form. Viewed from a purely Western perspective, I have to concede it’s a tricky debate.

First of all, it can be difficult to adopt a tone of high seriousness when discussing something described as a comic; and secondly, like many other people, I was raised in a generation where the school system and culture still largely exalted the literary form above the graphic. In the English language, one has a mere 26 letters with which to describe or destroy, page after page. Images and pictures, well, they’re considered something else entirely: the sole preserve of those few individuals gifted with a steady hand and a good eye. But what if each of us shared that same highly developed coordination between hand and eye as well as an appreciation for literature? Not just elegant handwriting — possibly soon to be a thing of the past in the US — but a close personal relationship with the literary and the graphic in equal measure.

“The use of striking images and graphic representation to accompany oral accounts was part and parcel of everyday Asian life.”

With the lunar new year upon us, Asia will soon be adorned with red and gold words, mostly the characters for happiness, prosperity and luck. Thirty years ago when I visited Singapore as a child, I found these repetitive colors and symbols garish and awkward. To me they were just lines or boxes of characters embossed in gold on red tissue paper, pasted to walls, windows and the backs of doors. There seemed to be nothing graceful about the way they were displayed, the larger and brighter the better being the prevailing orthodoxy. They were no subtle enhancement to a space, like a Christmas tree in a living room, but used boldly and frequently enough to change the look of a place entirely. These characters, though, are not just words but symbols which strike to the heart of Chinese culture and society; even foreigners who can’t read Chinese eventually come to appreciate their sense and intent because the word and the graphic symbol are one.

For instance, one of the first Chinese characters you learn is “wood,” mu. It’s a beautifully uncomplicated little image and possibly the first opportunity one has to unlock the deeper elements of a language written with symbols rather than an alphabet. It is the simplest and perhaps the most effective example of word and symbol combined. Each new student quickly realizes that Chinese characters are learned by rote. One receives a page of printed boxes, each intended to contain a single character, and one painstakingly fills in the whole page. Each character is written, left to right, top to bottom and outside to in — the repetition is relentless. For a Westerner, the beginning of this process is more like an art class than writing, as line, length, proportionality and spatial sense become the biggest challenges to drawing the character correctly. In the most elegant hand there is character, power and sensitivity of touch until, in calligraphy, writing elides into art.

The first eye-opener is to look over a page filled with characters. One suddenly sees a wooded area populated with crooked branches and stumpy trunks, and after five or six pages of practice one has a forest. Trees of all manner cover the paper until, after yet more pages have been completed, they start to assume a consistent form. No letters, no longer even words, just trees. In the character, meaning and image elide. For the reader there are responses on many levels, not just from seeing the word ‘tree’ repeated hundreds of times but in the response to the picture that is formed — a powerful, almost visceral response that has had 5,000 years to evolve, taking root deep in the psyche both of society and the individuals who comprise it Yet in China, like much of Asia, full literacy was not proffered to the many until the latter part of the 20th century. Prior to that most Asian people knew and recognized the bare essentials but relied primarily on the power of oral storytelling to communicate wisdom and ideas, often enhanced by live performance. Theater, opera, dance and puppetry were used for centuries in villages and towns up and down the continent, from Indonesia to Mongolia, India to Japan. Whether it was Chinese opera, Noh drama, Thai dance or Indonesian shadow puppets, the use of striking images and graphic representation to accompany oral accounts was part and parcel of everyday Asian life. Running deeper still are the stories traditionally associated with different foods, banquets and festivals, where once again everyday life, images and words combine seamlessly.

Printed graphic storytelling is an extension of all that has been performed for centuries across Asia, whether translating the ancient Mahabharata from verse and stage to the illustrated page in India, Cambodia and Nepal, in China’s Shuihu Zhuan (Outlaws of the Marsh or The Water Margin) moved from verse to scrolls to comics, Osamu Tezuka’s reaction to his war experiences in the hugely popular tales of Astro Boy, or Shaun Tan’s stunning The Arrival. These are seen as being as legitimate and masterful as novels solely of the written word because in Asia, and particularly where symbols are used rather than alphabet, the image is also the word and carries perhaps more potency and power than any arrangement of letters.

Duncan Jepson wrote the text for and co-storied the graphic novel Darkness Outside the Night illustrated and co-storied by Xie Peng (Tabella). He is the author of the novel All the Flowers of Shanghai (HarperCollins,US). His second novel, Emperors Once More (Quercus) will be published next year. All works are represented by Peony Literary Agency. He is an award-winning director and producer of five feature films and was a founder and the managing editor of the Asia Literary Review. A lawyer by profession, he lives in Hong Kong.

DISCUSS: Does the West Dismiss Graphic Storytelling as Second Class?