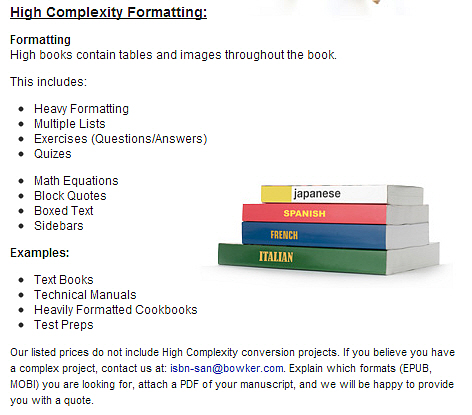 Bowker and DCL representatives said the intent of the new Bowker eBook Conversion Service is to “streamline the process” by which entrepreneurial authors produce ebooks, providing them not only with high quality format conversions of their work but also with ISBN identifiers for each formatted edition of a book.

In an interview, DCL CEO Mark Gross said, “Many authors don’t know where to look. They’re bombarded from all directions. Many of the organizations they come into contact with have a lot of strings attached to what happens to their book.”

By “strings attached,” Gross was referring, in part, to ebook production services that require an author’s property be sold exclusively through one retail channel or another.

Beat Barblan, Bowker’s Director of Identifier Services, pointed out that “for many authors, Bowker is the first stop,” as writers buy ISBNs, or International Standard Book Numbers, by which Bowker Research and other entities track and catalog the book industry’s output. “Authors today want a product that’s on a par with what major publishers put out,” Barblan said. “That’s why we’re excited to be doing this during TOC’s Author Revolution Day.”

“The small publishers and Bowker’s research arm reports, “The number of self-published books produced annually in the United States has nearly tripled, growing 287 percent since 2006, tallying more than 235,000 print and ‘e’ titles as of the end of 2011.”

Allowing for the fact that many self-publishers don’t attach ISBNs to their books—making it all but impossible for Bowker and other services to get hard figures on new production numbers (See Ether for Authors: Can We See You?) — the visible e-book production in 2011, Bowker reports, was 87,201, up 129% over 2010.

Print, while still selling more strongly than ebooks, grew in the same period, 2010, by only 33%.

“We searched for a reliable service that would enable our customers to retain ownership of their content,” Barblan in a prepared statement. While his company was initially hesitant to discuss rates in pre-announcement exchanges, the new site lists $1.60 per page in conversion rates for single-format projects of low and medium complexity. (The site lists what factors determine the complexity of a book’s needs.)

For EPUB and .mobi files of low and medium complexity, the listed rate is $1.85 per page.

For projects deemed high complexity — needing elements such as sidebars, block quotes, tables, multiple lists, question-and-answer exercises, quizzes — pricing will depend on the features required and will be negotiated with the author on a case-by-case basis.

“It’s hard to get the author,” DCL’s Gross pointed out in interview, “at the time they need this service.”

His company, based in Fresh Meadows, New York, near John F. Kennedy International, works in textbooks, legal and research references, and periodicals. But like many other providers of publishing services to corporate clients, DCL has wanted, Gross said, to reach the growing market of entrepreneurial authors who are now handling their own publication.

“Bowker is the perfect solution for us,” Gross said, “because it’s where they come first (for ISBNs) and we can give them a solution for publishing their books.”