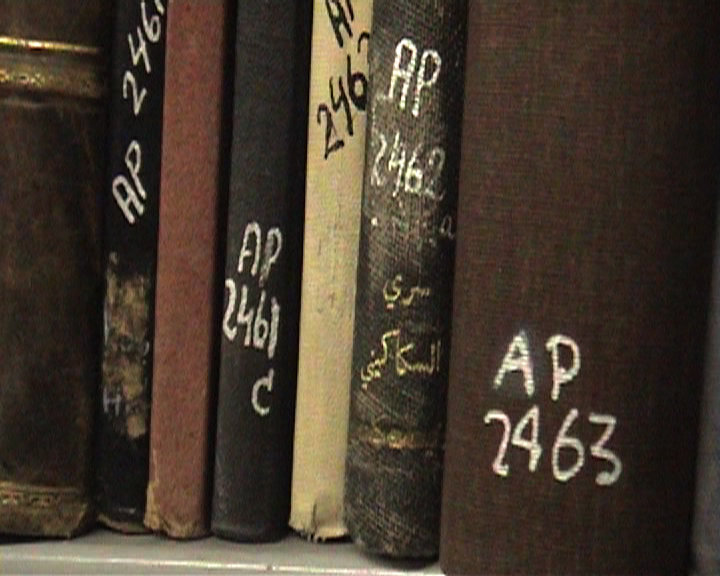 Some 6,000 books in Arabic remain in the National Library in Jerusalem marked “AP” for “Abandoned Property.”

Throughout history, as far back as Greek and Roman times, books and libraries have been destroyed or seized during wars as part of the destruction or appropriation of cultural heritage. Last week, Islamist insurgents attempted to destroy priceless historic manuscripts as they retreated from Timbuktu, and in 2004 Baghdad’s National Library and Archives lost 25% of their rare books. During the siege of Sarajevo, the Serbian army destroyed the National and University Library of Bosnia Herzegovina, and the Nazis systematically confiscated cultural property, including books, as did Napoleon in the early 19th century.

Earlier this year a documentary film called The Great Book Robbery brought to light a heretofore little-known part of history. The National Library in Jerusalem houses approximately 6,000 books in Arabic marked “AP” for “Abandoned Property,” which once belonged to Palestinians who fled the country or were forced out of their homes in 1948. That year, the staff of the National Library followed in the wake of Jewish soldiers who “collected” 30,000 books in Jerusalem alone, sweeping through the city’s prosperous Arab neighborhoods. A total of 70,000 books from private Palestinian libraries around the country were taken, as shown by Israeli documents pertaining to the 1948 war.

Although the film encompasses much broader issues, tracking what happened to these books is the central theme of The Great Book Robbery.

The Great Book Robbery – trailer from Benny Brunner on Vimeo.

“…occupation and colonization is not limited to the taking over of physical space,” writes Jewish Quarterly.

Benny Brunner, the Amsterdam-based Israeli director, said it took him five years to get the film made. He took inspiration from an article he read in 2007 by a PhD student, Gish Amit. Amit had sifted through countless declassified documents including memos from Kurt Warman, director of the National Library in 1948, and Dr. Strauss, then director of the library’s Oriental Studies department, which recount how the books were appropriated.

Both Amit and Brunner use a particularly poignant quote from the diary of Khalil al-Sakakini, a Palestinian poet, politician and educational visionary who fled his home in 1948 and whose books are among those in the National Library’s collection:

“Farewell, my library! Farewell, the house of wisdom, the abode of philosophers, a house and witness for literature! How many sleepless nights I spent there, reading and writing, the night is silent and the people asleep…goodbye, my books! I know not what has become of you after we left: Were you looted? Burnt? Have you been ceremonially transferred to a private or public library? Did you end up on the shelves of grocery stores with your pages used to wrap onions?”

An Israeli journalist, Haim Hanegbi, recorded how Sakakini’s daughters visited the National Library after the 1967 Six Day War after hearing rumors that their father’s books were there. There, the librarian allowed them to see one book, in which their father’s handwritten notes were scribbled in the margins.

In the film, Brunner interviews among others, Gish Amit, Uri Palit, a former librarian at the National Library, Aziz Shehadeh, a Palestinian lawyer who worked at the National Library cataloguing Arabic books and Nasser Nashashibi, a writer, who was told by a professor at the Hebrew University that he knew of him because the University had some of his family’s books in its library. Brunner’s request to interview librarians and to film the AP collection was not granted, nor was his request to interview someone from the Israeli Custodian of Absentee Property, which is under the aegis of the Ministry of Finance and governs the property of Palestinian refugees following the 1948 war. The film touches briefly on how the original intention of the book “collection” could have been to protect the books and that the library would be their “guardian,” but it soon becomes clear that the National Library, in cooperation with the Custodian of Abandoned Property kept the books for almost 65 years, making no effort to return them to their owners. There has been no official request from the Palestinians as of yet, but prior to Gish Amit’s article, few people even knew of the existence of the books. As Amit wrote in an article in the Jewish Quarterly in 2008:

“This untold story of the fate of Palestinian ‘abandoned’ books clearly demonstrates how occupation and colonization is not limited to the taking over of physical space. Rather, it achieves its fulfillment by occupying cultural space as well, and by turning the cultural artifacts of the victims into ownerless objects with no past. Israel’s collection of Palestinians’ books marks the transformation of a lively and dynamic Palestinian culture into museum artifacts. Thus, Palestinian’ books were placed within the shrine of Israeli libraries, fossilized on the shelves — accessible and at the same time completely lifeless.”

“The question is,” said Brunner, “what happened to the 24,000 remaining books that were “collected” in Jerusalem? In the 1950s all the books that were catalogued had an index card, for example “SAK” would indicate the book was from the Sakakini collection. In the 1960s they renewed the cards and on the new ones there was no code so they could have been incorporated into the general collection in the Oriental department. Finding them means you would have to employ 5,000 students to look for stamps or handwritten remarks…”

Aziz Shehadeh suggests that if the books are returned, they should be divided between the two Palestinian universities of An Najah and Bir Zeit.

Brunner is doubtful, but said he hopes that the outcome of his film will be that at least the books marked “AP” will be returned to their owners.

The Great Book Robbery will screen across the US this month. See the dates and times here.