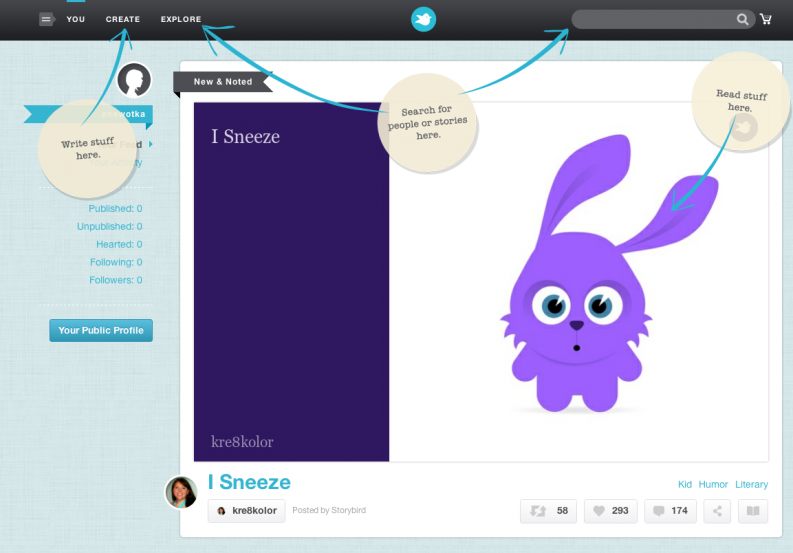 Storybird offers free illustrations as inspiration for writers to produce a corresponding text, resulting in a variety of books from the same source.

Trying to explain to someone what the crowdsourcing website Storybird is can be difficult, because the truth is, it doesn’t quite know what it is yet. Or rather, what it’s to become. In a nutshell, Mark Ury, the CEO and founder, describes it as a “publishing platform focused on visual storytelling.” His slightly longer elevator pitch is: “We curate artwork from illustrators and animators around the world and inspire writers of any age to turn those images into narrative stories.” As sweeping as that sounds in theory, most perplexing of all are its statistics. “In 24 months our members created 5 million stories — 80 times more than the combined children’s and YA book markets,” he says.

Also? He should tack onto that, “We’re on fire.” As of now, they can boast two million members globally. With that force of audience, the potential for turning the traditional children’s and YA publishing model on its head exists as day turns to night. But wait, don’t compare it to publishing, because that’s not quite what it is. No, but wait — it does marry stories with illustrations, making them available for publication with a paid print-on-demand feature, whereby “author” decides to print a book (they use CGX’s digital print-on-demand systems).

Here’s the limitation, though. If you write a story or “book” on the site, you’re the only one who can purchase it. Even if it’s wildly popular. If you do decide to print your book in limited capacity, artists keep the copyright, and get a royalty between 35–50% of the product sale, depending on whether it’s printed or downloaded (“We’re so foolish” says Ury of their royalty largesse). Writers, on the other hand, don’t receive anything, because only they can purchase the book.

Big publishers have approached them about purchasing the popular online marriages for more typical releases, but for now Storybird is saying “no” to everything. “It’s just too soon. It’s exciting to see where it’s going,” says Ury. Wisely, they’re minding their time and investigating the changing landscape without committing to anyone on the outside just yet. “This year we’ll start to hand-pick some popular stories and test their commercial viability, both on and off Storybird.” Why the delay? “Well, an artist can have literally tens of thousands of writers who have used their work. So who, then, should be the commercial ‘ambassador’ for the artwork and have their book chosen over others? This is new territory with lots of issues to iron out.” For the artist members, it’s like an open-air marketplace, only passers meandering through can use the art as a backdrop for stories that they’re writing. The benefit to them is monumental. “We suspect the social nature of it will drive traffic to their online commercial spaces, like their professional webpages or their Etsy stores,” says Ury. This is a very different from a traditional publishing model, in that it allows for a direct relationship between an artist and the consumer; artists can upload, set and forget about it; they continue to own the copyright.”

Who are these two million international members? Teachers love it, families love it, and…tween and teen girls especially love it, hovering in the empathetic virtual walls with the true stories of their hearts: boyfriends, anorexia, bullying, families moving through divorce, and plenty more heavy topics. “What a lot of teen girls are doing is using their story as a platform to begin conversations,” says Uly.

And who are the enthusiastic auteurs? “The vast majority of writers are amateurs using it as a training ground, but professionals are also starting to join. It’s a place where they can start a conversation about their work.”

To understand fully the grandiosity of scale as well as the overall functionality of the site, I signed up to become a “regular” member. The website is very inviting. There is a Create button, and an Explore button. Really, it’s CMS for dummies. On the homepage was a story called “Be My Valentine,” by artist “Pixopop”, and writer “Elspeth.” Click on the story and a beautiful slideshow book pops up, in this case, Eslpeth’s love poem that accompanies Pixopop’s anime-inspired animal world. Since I liked Pixopop’s work, I clicked through to his/her member page which had links to both official website and portfolio of Pixo’s ouevre.

Theoretically, I could either pay a nominal rate through Storybird to download a PDF of P’s art in the story, or I could click through and have direct artist to consumer contact, eliminating our Yenta altogether. I went back to investigate Elspeth Munro and learned that she must be a Premium member, because her page’s background has a pretty fleur de lis background that I couldn’t work out, and she’s written 44 stories all told.

This all leads me to wonder that if I were to write a “book” alongside some cute Valentine-themed inspired illos, could I be chosen by Storyboard to be on their homepage too? The story, incidentally, has been tagged “Teen/Romance/Dreams.” Open the comment thread and it’s pulsing with 55 comments already. EmilyDisney1 “hearted” it, and MightyFighty2000 wrote “Heart.Broken.” and CailinWilliams practiced a more thorough review: “wow i think thats great but i’m not trying to be mean but maybe next time write more words in the story okay bye.” Teachers can upgrade to Pro accounts with grading, advanced management tools, free downloads for each student, and many other handy features, and members like Elspeth can upgrade to premium membership to get profile customization, different book cover designs, free downloads, accelerated moderation, and other social features. The premium conversion is booming: Ury and his gang were hoping to convert into a 2–3% premium membership, but have surpassed that in waves, rolling in with an initial 10% conversion rate.

How they keep the site family clean, considering the huge amount of content, is with a tribe of volunteers called “Storyspotters” who scroll through the stories and images to make sure they’re not offensive. If I like an author or illustrator, I can follow them, a la Twitter. If I write something, I can post whatever I like to any social media network, offering StoryBoard plentiful routes for getting out there. “You can embed it in your blog or wiki, share on social nets, send via email,” Ury says.

It’s a strange and vast digital beehive. One analogy that Ury offers up is interestingly enough, a break dancing circle. “In breakdancing circles, you have a group of people watching something, and then circling around, and finally mimicking. This social component gives people a way into writing,” he says. The teen girl audience is by far and away the most tribal of the members; the intersection of their stories with the issues in their lives offers an immediate forum for support from like-minded creative peers.

Another more pedantic business school case study that Ury cites is the difference between Google and Microsoft. “As we grew, our question became: how big is the opportunity? The more we tinkered, the more we saw a blue sea. We are to publishers what Android is to Microsoft: a free alternative that undermines the shrink-wrapped IP model. With Android, Google says ‘the IP is free’, then proceeds to make money by moving the toll gate downstream to search. For us too, the IP is free. Millions and millions of stories every year, in every category. And because we’re in the business of creating abundance rather than managing scarcity, we find it easy to shift the location of the toll booth. This is something the incumbents simply can’t do.” Or in other words, “It’s a simple idea. We use art to inspire people to write.”