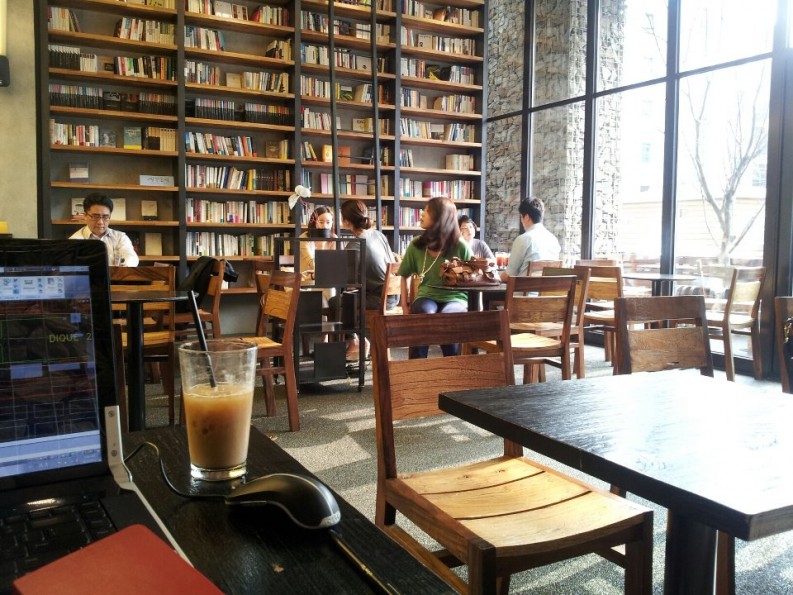 Publisher-owned and run bookstore cafes give publishers an opportunity to interact directly with readers and book buyers.

For decades, many publishers maintained their own bookstores. You can still see the signage on the old Scribner’s building where the ground floor was once a glorious bookstore, which was open for a century and closed in 1989, became a Brentano’s for a decade, and is now a Sephora. And publishing types of a certain age remember the beautiful Doubleday Book Shop on Fifth Avenue, itself one of 8 grand bookstores on the Avenue to close in the last two decades of the 20th century. Today, some publishers still maintain their own storefronts, albeit ones that are significantly more modest than those of the previous century. Melville House and PowerHouse, both in Brooklyn, are two publishers that have opened up successful bookstores; out West, San Francisco’s McSweeney’s has sponsored a variety of novelty themed stores that also sell their wares.

And the trend is taking off, albeit, further afield…

In Korea, the trend of publishers opening bookstore cafe — the 21st-century incarnation of what passes for a bricks-and-mortar bookstore — is taking off. The Korea Herald reports that in Seoul, “cafes that provide books to read reflect the ever-changing trend and culture of the publishing industry here.”

Many of these cafes are located in the city’s Hongdae area, home to the city’s arts and indie music scene, and the former site of many of Korea’s major publishing houses, many of whom have moved to Paju Book City, while others still remain, leaving a large population of editors and writers eager to take advantage of the area’s cafe scene, including book-themed cafes that are rapidly becoming multi-purpose culture spots.

“It really is an enormous joy to see your books being read by real people.”

In one such instance, Jang Eu-ddeum, a former marketer for the major publishing house Munhakdongne Publishing Group, opened the book-themed Cafe Comma in 2011. The cafe, along with serving refreshments, also operates as a bookstore, selling remainders published by Munhakdongne at a 50% discount.

“Before opening the cafe, we (the publishing company) had to throw most of these books out,” said Jang. “It cost too much to hire someone to take care of them. It was really heartbreaking to see them taken away to be destroyed.”

Jang finds a great deal of pleasure in seeing customers reading the books that he had a hand in creating. “When you work at a publishing company, you hardly get to see the readers who actually enjoy the projects you created. But in this cafe, the readers are physically here. It really is an enormous joy to see your books being read by real people.”

And another major publishing house, Changbi Publishers in Paju Book City, opened its own cafe in February last year. The cafe, which also sells the books that the company publishes, has become a “hot spot” for literary events, holding more than 80 such featuring some of “the most celebrated writers and scholars in the country”, including scholar Kim Doo-sik, poet Kim Seon-woo and novelist Gong Ji-young.

The cafe has even became a political hot spot, often visited by DUP candidate Moon Jae-in and independent candidate Ahn Cheol-soo, whenever they had meetings with literary figures.

“We really strive to be something more than a cafe, or a bookstore, or a library,” said the cafe’s manager, Jeong Ji-yeon. “Many editors of Changbi also work in the cafe, holding their editorial meetings here. We receive visits from both our readers and writers. We feel it’s important to have a physical place to display the books and interact with the people, in spite of the increasing number of online bookstores. While ebooks are all about the content, books as hard copies have something more to offer.”

For Jang, it’s all about filling a vacuum. “The disappearance of (physical) bookstores is unfortunate for the reading public and the country, and really putting the existence of publishing houses at risk. But reading (hard copy) books is the kind of experience that is incomparable to anything else. It requires one’s initiative and physical actions. The stories don’t continue unless you flip the pages with your hands. That’s why every reading experience is very personal, and that is why we need physical spaces to offer that opportunity to the public.”

Is there more opportunity for publishers to get into the retail game as they seek more and more direct-to-consumer sales, or is bookselling no longer part of publishers’ DNA or core competencies?