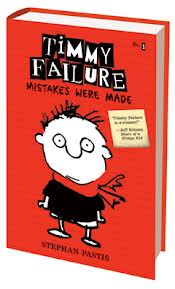 I’m going to confess a personal bias: Stephan Pastis, the one-time lawyer turned cartoonist whose comic strip Pearls Before Swine is the only one that I read daily, the only that makes me laugh out-loud on a far too regular basis. I am, in short, a fan. Big-time fan. Even so, when I heard that his first novel for middle-grade readers, Timmy Failure: Mistakes Were Made, was being published by Candlewick Press, I was a bit concerned. Pearls Before Swine is, to put it mildly, a strip with an edge, known for its dark if not altogether blackly humorous outlook on life, with references including but not limited to, Satan, Middle East Terrorism and the Family Circus, beer and drug use, along with a liberal use of painful puns, and many many many deaths. How would Pastis’ worldview translate to the world of children’s books?

I needn’t have worried. The book, which follows the misadventures of the more than slightly obtuse but still extraordinarily self-confident Timmy Failure, who, along with his best friend and business partner, a 1500 pound polar bear named Total, operates the Total Failure detective agency, is a laugh out loud delight, one that should appeal both to kids and parents alike. (What adult wouldn’t laugh at chapter titles like “The Candy Man Can’t ‘Cause He’s Missing All His Chocolate” and “Darkness on the Edge of My Foldout Bed?” And what kid wouldn’t delight in the adventures of a detective who, when hired to find his friend Gunnar’s missing Halloween candy, spies his younger brother Gabe sitting on his bed, surrounded by candy wrappers, face smeared with chocolate and an empty plastic pumpkin on the floor and writes in his notebook, “Gabe: Not tidy.”)

I was fortunate to have the opportunity to chat with Mr. Pastis about his book and to ask him the hard-hitting questions that needed to be asked.

PP: You went from being an attorney to a cartoonist whose strip, Pearls Before Swine, has what some would call a fairly dark view of life  along with what could perhaps be defined as an excessive amount of deaths, crocodile and other.  How do you go from that to children’s book author, a job which requires, I suspect, a certain amount of sweetness and optimism?

Pastis: The sweetness has been in my strip along, it’s just been overwhelmed by the death and cynicism. It wasn’t an abrupt shift like going to a pop-up book: Timmy is brash, arrogant, and self-deluded, so he’s really a bit like Rat (one of the two main characters in Pearls). I wrote what I wanted to write, and somebody else fitted it into a category. And what I write tends to appeal to eleven year old kids — I write what I find funny, I’m obviously stuck in some kind of adolescence. If I don’t find it funny, I don’t do it. And the only real adjustment I had to make was literally no beer cans, no smoking, no swear squiggles. They were the only things.

But the flip side was that it was very freeing,  When I’m doing the strip, and it’s a series, I’ve only got three panels — one is wasted on repeating the theme, so I have very little space left. So when somebody says to me you can tell your story without worrying about space, we’ll give you 250 pages, it was a big canvas — that was all incredibly freeing. The only difficulty I had is that when I’m done with a strip, I like to hold it at arms-length to get the totality, and I couldn’t stand that far away from the book. I had to reread it in its entirety, the whole thing on a Monday morning when I started working. That part got old.

I noticed certain similarities between Timmy and one of my favorite fictional characters, Ignatius P. Reilly from Confederacy of Dunces. Was that intentional?

Ignatius P. Reilly, the character, is the best humor that has ever been written in novel form. The similarities are totally intentional. I had him in mind, and Ricky Gervais in the English version of The Office. Not literally, not taking on their attributes. But the blind spot that they believe themselves to be one thing while the reality is something else. Ignatius thinks he’s a hero, when he’s really just a fat guy without a job.

If you study comedy — if you look at Chaplin and Laurel and Hardy — they all have that blind spot. If you think about Ignatius, he’s an unlikeable guy, but he’s vulnerable, and we all have that it might be in just one aspect of our live or in many, there’s things we prop ourselves up with — we all delude ourselves to some extent.

Obtuseness is the key. When I was looking at other books, The Hardy Boys and Encyclopedia Brown, they’re all clever clever kids. And in that lay the solution: I thought if you worked in that genre and you had a kid who was a real moron, not necessarily Clouseau, but one who couldn’t do what he was supposed to doing — I thought that worked right away. I was telling people about Timmy that “He could make any mystery and make it more mysterious.” That seemed to sum it up pretty well.

With two books complete, Pastis is eager to write more. “I miss Timmy when I’m not writing him…I really look forward to it.” And with the backing of a $250,000 marketing campaign from Candlewick, which they claim “the most robust ever for a debut book,” it seems not unlikely that we have seen the last of young Mr. Failure.