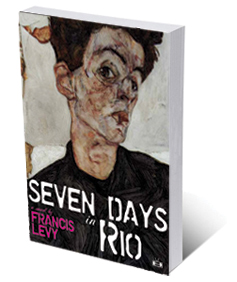 COLUMBUS: Midwesterners do their best thinking in bars, most of it aloud. Like, loud aloud. And although they—all right, we—rightfully dismiss most of those thoughts the following morning, occasionally we’ll vomit up an idea that sticks to the wall.

Sometimes we’ll even unwittingly provide the name and rallying cry for a budding literary movement.

Tending bar one night in the mid aughts, Eric Obenauf was doing his best to ignore a squawky patron, “a wasted Midwestern guy” who Obenauf still remembers clearly. Picking up on Obenauf’s polite disregard, the man shouted “Don’t mind me — I make more noise than a two-dollar radio.”

“What we publish, I don’t see it being published at the larger houses.”

The literary-minded Obenauf had a thought: If a drunken barfly can be impossible to tune out, why can’t subversive literature have the same effect? Weary of what he considered a “lemonade-stand culture of literature,” with corporate presses flooding the market with formulaic books, Obenauf in 2006 founded what he labeled the Two Dollar Radio Movement and began publishing titles under the tagline “Books too loud to ignore.”

Two Dollar Radio [TDR] has since made plenty of noise. Many of its several dozen (mostly fiction) books have received coverage from the likes of The New York Times Book Review, NPR, the Believer, and O: The Oprah Magazine. Los Angeles Times book critic David L. Ulin calls TDR “up-and-coming,” and the Brooklyn Rail, in a review of Francis Levy’s Seven Days in Rio, writes that TDR “has released some of the finest works of contemporary fiction in the past few years.” Recently I spoke with Obenauf to discover what has caused TDR to make such a splash outside of the industry’s mainstream. “It’s the type of work we’re trying to champion,” he says, “bold and noisy, aggressive. What we publish, I don’t see it being published at the larger houses.”

Among TDR’s loudest and most popular titles are Grace Krilanovich’s The Orange Eats Creeps, Some Things That Meant the World to Me from Joshua Mohr, and The Drop Edge of Yonder, Rudolph Wurlizter’s first novel in over twenty years — all books that fit Obenauf’s requirement of noisy and aggressive writing, showcasing a surreal, nightmarish collection of wild mountain men, street junkie teens, and dumpster divers.

Obenauf has a modest goal for each of his, as the Village Voice calls them, “hopelessly non-commercial” releases: to sell 5,000 copies. TDR’s bestselling title so far, The Orange Eats Creeps, has sold just over 6,500 copies.

TDR publishes five to six new titles a year, so even if they reach their goal of 5,000 for each, we’re talking 25,000-30,000 books a year (minus backlist). When you consider that the Fifty Shades trilogy has sold scores of millions of copies, TDR’s numbers seem miniscule. Then again, if a Fifty Shades manuscript had crossed Obenauf’s desk for consideration, he would’ve chucked it where most in the literary world think it belongs. “We’re interested in singular work rather than something that might appeal to 100,000 readers,” he says. “The change we’re trying to inspire [is] the celebration of artists and writers who are doing their own thing.”

And anyway, TDR’s staff of four has its hands plenty full with its current output — especially since they all keep second jobs. Working out of Obenauf’s house in Columbus, Ohio, are Marketing Director Brian Obenauf (Eric’s brother), Outreach Coordinate Emily Pullen, and co-founder Eliza Wood, Eric’s wife, who also works for McGraw-Hill. Eric himself works 3–4 nights a week waiting tables; where one imagines he keeps his ears open to customer patter.

“We know exactly how much we can expect to make from a given book,” he says. “[It’s] enough profit for one of us to make a modest living.” “There are a lot of readers out there hungry for [this] kind of work,” Obenauf adds. Some readers are so hungry that they’re willing to advertise the fact, permanently, on their skin. TDR offers several subscription plans, but the most exclusive is the “lifetime” option — get the TDR logo tattooed on your body and receive every book for free. So far, upwards of twenty readers have done so.

“It shows we don’t take ourselves too seriously,” Obenauf says. “It makes us chuckle.”

Get the TDR logo tattooed on your body and receive every book for free.

Liberty Hardy is a member of the tattoo club. When I asked what attracts her to TDR, she said, “They are a hip indie press publishing an esoteric selection of fantastic reads. I love them so much I marred my flesh for them.”

“[Opting for the tattoo] took only a moment’s thought,” says Caleb Andrew Ward, another lifer. “The Two Dollar Radio books are taking experimental fiction to another level.”

And now TDR is hoping to take experimental nonfiction to another level. Although the vast majority of its books are fiction (and will continue to be so, according to Obenauf), TDR has released the first issue of Frequencies, its nonfiction journal offering what are labeled “artful essays.” Featuring work from Joshua Cohen, Tracy Rose Keaton and others, Obenauf says that Frequencies offers writing that “doesn’t follow the prescription of what nonfiction can be.” Working off a small budget makes word of mouth a key element for TDR, but often it can take months for a book to catch on. Joshua Mohr’s Some Things That Meant the World to Me returned modest sales upon its launch, but as the months passed, more and more online reviews appeared, people started touting the book on social media, and sales picked up. “That’s when you realize you’re onto something,” Obenauf says, “when a book has staying power, when there’s a dialogue between readers that far after publication.”

Mohr often quotes Stephen Elliott, who once said that nobody recommends good books to their friends—they only recommend great books. “So when you see people … giving [your books] as gifts,” Obenauf says, “and when you start seeing people on the subway reading your books, you realize you’ve done something special.”

But trying to overthrow that lemonade-stand book culture is no easy task. “We live in a time where everything is commercialized, and you have that impression in your mind of sickly déjà vu where you think you’ve seen everything before,” Obenauf says. “It’s part of a toxic atmosphere where you really just long for something pure and individual.”

Just enough readers are turning to that “pure and individual” to keep TDR, and other small presses like it, afloat. Not that Obenauf considers those other small publishers to be competition. “We’re all in this together,” Obenauf says.

And the corporate presses? “I don’t think they really care what we’re doing,” he says. “If anything, we’re helping them find new, attractive voices.”

David Duhr is fiction editor for the Texas Observer and runs WriteByNight, a writing center in Austin. Catch him on Twitter at @write_by_night.