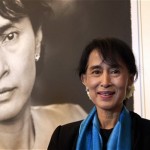 Literary life is beginning to bloom in Myanmar as new freedoms take hold. “It’s the draw of this country and Aung San,” said festival director and wife of Britain’s ambassador to Myanmar, Jane Heyn, at the festival’s close.

“It’s far away from when I was at university [in the 1980’s], when we had to hand out our poetry magazines in secret.”

In The Myanmar Times, Mrs. Heyn discussed how the country’s new freedoms (an end to censorship, a call for free exchange of ideas) had made the festival possible. “When I saw how it difficult it was to buy a book — new books or modern literature at all — that’s what gave me the idea. The main purpose of the festival is to provide a platform to exchange ideas, to exchange writing and discussion.”

During one such panel discussion, author and historian Thant Myint U commented, “Two years ago we might not have thought a festival like this was even possible.”

“There was no freedom at all before,” added poet Saw Wai, who was jailed under the former junta for writing a satirical poem about the regime. “As censorship has been abolished, we have become able to be more free and open,” he was quoted as saying in The Myanmar Times, adding that poetry and cartoons were becoming increasingly “bold” with their satire.

For poet and translator Kio Ko Thett, who was at the festival to promote his new anthology of Myanmar poetry Bones Will Crow and Other Works, the recent changes are obvious. “It’s far away from when I was at university [in the 1980’s], when we had to hand out our poetry magazines in secret.” At stalls set up around the festival site, books were being sold that once had been banned in Myanmar, many of which were donated by publishers and authors as a gift to the festival.

Still the main draw was Aung San, who spoke to a standing room only crowd on the power of literature, and how books helped her get through the fifteen years she spent under house arrest.

“I read a lot about prisoners and prisoners of conscience. Through books you can learn how people cope intellectually and spiritually through the challenges of life.”

And while it might come as a surprise to many that her favorite genre of books is detective stories, she told the crowd that they were a great help in helping her to understand people. “And now that I’m chair of the Law and Order Council,” she noted, “I know a lot more about the law and courts because of reading detective stories. The more detective stories you read, the better able you are to work out who the villain is.”

She also noted, in a sentence that undoubtedly struck a chord with many in the crowd, that literature not only serves the soul but can be a constant source of strength, “If you have ever learned some poems, they will come in very handy if ever you are imprisoned.”

Looking to the Future

But the festival was not only a way of shaking off the country’s past – it was also a look forward into the future.

Aung Zin was quoted in The Guardian. “I’ve seen the atrocities that are occurring [there]. It’s daily news. Usually we when we hear about war, we think about Iraq and Afghanistan. But now it’s so close to home.  It’s our reality now. And I chose to focus on that because in a war, two parties will fight but there’s always a third person that will die.”

And it is writers like Zin, who, not haunted by the nation’s past, who are most optimistic about the nation’s future. “I don’t want to sound boisterous, but actually, no, I do not fear. I am the first winner of the Irrawaddy literary festival and…I want this to be a catalyst to other young writers who want to write.

DISCUSS: Which Country is Most Hostile to Literary Life?