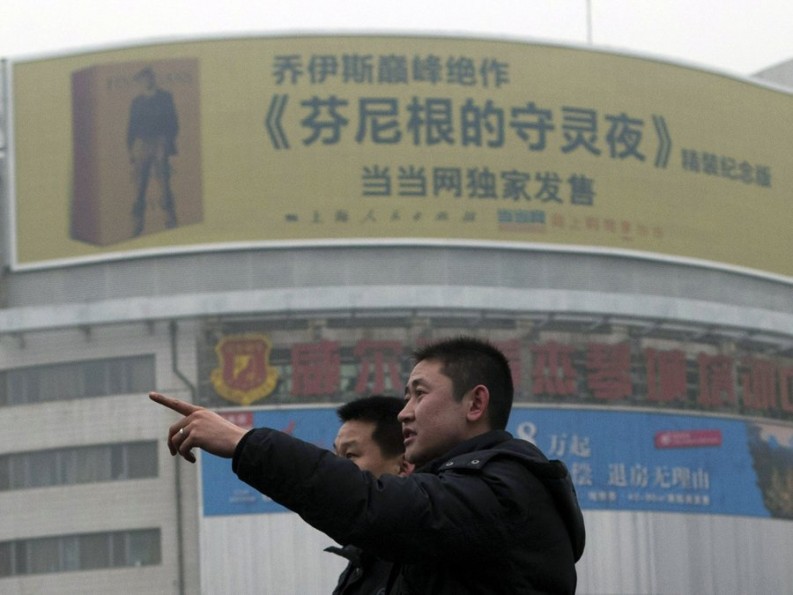 James Joyce's Finnegans Wake is so popular in China the publisher has put up billboards featuring the book.

Last September, we wrote about Dai Congrong’s many-year effort to translate James Joyce’s fiendishly difficult modernist classic, Finnegans Wake into Chinese. And now, to the surprise of many, the 1939 novel has become a bestseller, selling out its initial print run in just three weeks.

“It’s totally unexpected!” said Wang Weisong, editor in chief of Shanghai’s People’s Publishing House, the publisher of this new edition, as quoted at chinaculture.org, adding that the popularity of such a book “reflected greatly upon today’s cultural landscape in China.” (It should be noted that when the first Chinese translation of Joyce’s Ulysses went on sale in 1995, more than 1,000 readers waited in line in Shanghai to get a copy.)

The Shanghai News and Publishing Bureau said that the novel’s sales in Shanghai last week were second only to a new biography of “good books,” the term used for more serious reads.

The AP has reported that Finnegans Wake was promoted through the use of an extensive billboard campaign in major Chinese cities such as Beijing, Shanghai, Guangzhou and Chongqing — 15 of them in Shanghai alone. The official Xinhua News agency said that it was the first time a book had been promoted that way in China.

In addition, workshops involving some of China’s most famous writers discussing the work were held by the publisher in Beijing and Shanghai. At once such event, Jiang Xiaoyuan, a professor with Shanghai Jiao Tong University said, “Joyce must have been mentally ill to create such a novel!”

Another noted Chinese novelist, Wang Anyi, admitted that she would have found it difficult to persuade herself to read the book if it wasn’t for her “great confidence in Irish literature.”

As might be expected, the book’s unexpected popularity created a huge internet and social media buzz. “Eudaimonous,” said on China’s Twitter, Sina Weibo, “Finnegans Wake is a book for bibliophiles, for critics, but not for readers,” while other Weibo users added that without reading it, one lacked credibility as a literary buff.

Li Weiqi, a bank employee and self-professed serious reader wrote the following on his microblog after seeing one of the publisher’s billboards selling the book: “It’s beyond my comprehension that a niche work should cause a sales tsunami. Might it be that it’s being hawked as a commodity to attract the pretentious?”

Even so, Murong Xuecun, whose debut novel, Leave Me Alone: A Novel of Chengdu made him famous and whose microblog boasts over 1.1 million followers, was quoted by the Associated Press as saying:

“It has the reputation of being inscrutable, and people are so curious that they want to read it themselves. I am sure that’s universal around the world. It does not say the Chinese readers have a higher taste.”

Chen Xin, president of the Shanghai Century Publishing Group summed it up by saying, “The work occupies a preeminent place in English literature, despite its difficult language and structure, so Chinese readers, no matter whether they can understand it or not, are willing to buy a copy, and have a try.”

He added that the book’s popularity could not be called a victory for literature, but is a result of aroused public curiosity during the Internet age.