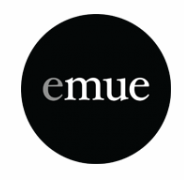 Emue is not to be confused with the emu, though both are found in Australia. Emue Books is a new publishing house that specializes in Francophone literature and treating authors fairly. Its mission is reflected in its name, an acronym for Edition MUlticulturelle Equitable. (For non-Francophones, that’s “multicultural and fair publishing.”)

Launched in 2010, Emue pierced a void keenly felt by its founder, Sophie Marozeau. Living in Australia, she wanted to continue reading in her native language, but finding French books abroad proved difficult. When work for Lonely Planet travel guides introduced her to ebooks, she saw a solution. Teaming up with Ray Parnac, an author and librarian, and Emilio Sciarrino, a student at the École Nationale Supérieure in Paris, she founded a hybrid press that would publish electronic and print books.

Benefitting Francophone readers is only half the story, however. “Our main mission,” Marozeau says, “is to circulate [our books] as widely as possible and help authors share their emotions, their stories, their words, to the world.” She notes that the traditional publishing industry in France often overlooks writers far from their mother country, whether French expatriates or foreign immigrants.

Emue, by contrast, welcomes transplanted voices. “Perhaps,” Marozeau speculates, “because we, the three founders of Emue, are expatriates ourselves, we have been attracted to ‘rootless’ authors, and they have been attracted to us.” Whatever the psychology behind its orientation, the publisher is well positioned for cross-cultural work. Emue maintains offices in London and Paris as well as Melbourne, and a New York City presence is under construction.

So what kind of stories are Emue’s far-flung authors sharing with the world? Short, structured narratives, for the most part. Marozeau points to her company’s latest release, Ossobuco, as a prime example. This novella by Andrea Marcelli (an Italian now living in Paris) is, in the words of Marozeau, “a two-voice narration structured in a very clever way, with the flexibility and ease so typical of Generation Y.”

Such narratives have a couple advantages. They lend themselves to reading on the go, whether via tablet, ereader, or mobile phone. (Ebooks constitute 57% of Emue sales, compared to 8.4% at Hachette Livre.)  Also, their readability makes them congenial to anyone learning French.

The prose style of Emue’s books increases their accessibility. Marozeau characterizes it as “contemporary and universal,” in contrast to traditional, “sometimes pompous” French writing, abounding in figures de style. At the same time, Emue’s modern voice remains distinct from that of many current Franco-French authors. These writers, Marozeau observes, “are often Parisian hipsters with their own codes, which can be quite irritating when you do not live there.”

Marozeau sees the future of reading moving in the same direction as Emue, toward a world of fewer boundaries and fewer restrictions. As a hybrid publisher with authors and offices around the world, Emue — unlike the emu—is ready to take flight.