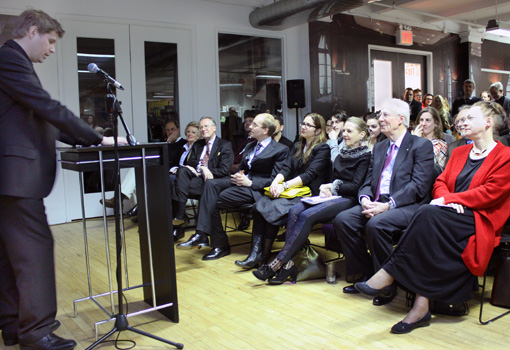 The following speech by Daniel Kehlmann was offered as a valediction to editor and translator Carol Brown Janeway upon her being awarded the inaugural $5,000 Friedrich Ulfers Prize as part of the Festival Neue Literatur. Kehlmann is a bestselling German author, whose books Measuring the World and Fame were translated and published by Janeway at Knopf. In the currents of life,
in action’s storm,
I float and I wave
With billowy motion!
Birth and the grave
A limitless ocean,
A constant weaving
With change still rife,
A restless heaving,
A glowing life—

This is from Bayard Taylor‘s translation of Goethe’s Faust from 1912, and the reason I’m quoting it…Actually, there is no reason. I’m just doing it because a) a German has to quote Goethe sometimes, and b) there is a hidden Goethe quote in every single book of mine, for no other reason that I want Carol Janeway to locate it, which she always does. So I thought, if I give a speech about Carol why not just get it out of the way right at the beginning. Perhaps I should also add Carol hates Goethe.

Some of us, those who neither write nor work in publishing, might not know it: Carol Brown Janeway is first and foremost a publisher. She translates for her own — and our — pleasure. She translates on the side and for recreation, translating is how she spends her holidays.

She was born and grew up in Edinburgh. After graduating from Cambridge University she entered publishing, first working briefly in London as a literary agent before moving to New York. For most of her years in this city Carol has worked for America’s most prestigious publishing house. She is a senior executive at Alfred A Knopf, with a particular focus on international literature.

Well, the truth is, in publishing she is a legend, admired and sometimes also feared, but that’s not the reason why we’re here today. We’re here because of Carol Janeway, the translator. And of course we’re also here because of Fred Ulfers. There are so many people who’d love to receive prizes. I might be one of them. I know what I’m talking about. But there are very very very few people who are capable and idealistic enough to put their money on the line to bankroll those prizes. Fred is one of them, and I am deeply moved by his generosity.

Once a year in the summer, usually in August, Carol withdraws to her house at Hudson River and translates from French or German. She works from early in the morning to late in the evening. And for those people who always want to know what kind of device writers use, she does write in longhand. She translates because that’s what she likes to do, so nobody can force her to translate something she doesn’t really like. To be translated by Carol is a privilege you can neither buy nor apply for, it just comes to you or it doesn’t. Also one of her principle rules is that she translates writers who are still alive and have at least some command of the English language, which makes it possible for them to read Carol’s translation and work with her on questions and details.

Carol is not what people nowadays like to call an Academic translator. Academic translating means, more or less, translating in order to make it sound bad. I am not joking. For quite a while now some of the more important University departments for translation have taught their students to stay as close to a text’s original syntax as possible, in order to make the reader never forget that he or she is reading a translation. Originally, this idea was not just pure lunacy. For example Wolfgang Schadewaldt’s brilliant translation of Homer’s Odyssey gives the German reader a good idea of what Homer’s original syntax, form and voice sounds like. But Homer is one thing, and trying to establish foreign writers in an environment famously disinterested in foreign writers (I will never forget the radio host in Seattle who asked me “And…is it true…that your book was not actually written in English?”), that’s a different story.

A few months ago, a friend and colleague, one of Germany’s best and most renowned younger writers, who commands a beautifully elegant style, showed me the manuscript of somebody’s translation of his last collection of stories. It was a nightmare. It read like Google translate or like the joke of some third-term German student. But displaying a remarkable case of publishing-related Stockholm syndrome, he explained to me that something translated from the German was not supposed to sound like something written in English. When I said I think something translated from the German should sound exactly like something written in English, if there is any way to make that possible, he became very quiet and said maybe, who knows, but now it was too late to change translator anyway.

When it comes to translation theory, Carol is a dilettante, she is just incapable of understanding why it should be good for a writer to become unreadable in the process. She doesn’t try to imitate French or German syntax, she creates a voice, which is close to the author’s original voice, but is an English version of it, something not equal, but equivalent. When Carol is working on a translation she is actually a writer, who invents her own sentences alongside the writer’s sentences, and sometimes I happened to wish I would have been able to invent some of the phrases she invented for me, or at least something as funny and sharp and elegant.

Elegance is, of course, a dangerous word. It sounds stuffy and maybe old-fashioned. But when I wrote my novel Fame I invented a disturbed Internet nerd who writes for an online forum in a totally invented skaz-language, always trying to use English phrases and always getting them wrong. At the time I wrote this I thought, “but how can this ever work in English? It’s not possible. There is no way. You idiot, I thought, you like America so much. You love English literature. You are so proud of being published by this wonderful publishing house. And now you write something which can be translated into any language in the world, except English? What the hell is wrong with you?”

But writers are strange people, they like to contradict themselves, so I continued.

And, thankfully, Carol wrote to me that she liked the book and would also consider translating it herself, were it not for the Internet nerd chapter. “There’s just,” she said, “no way to do it in English.” That’s right, I thought, and replied right away: “No, absolutely not, it’s actually quite easy, we’ll find a way, I am sure.” Thank God I was able to con her into believing me. And so she started translating and by the time she reached that chapter, which comes quite at the end, it was too late to turn around. So in the hot summer of 2009 she spent a hellish week in her house on the Hudson, only interrupting work to fire off scary e-mails to me, and when the leaves started to fall she came back with something incredible: a story full of her own sentences, her own ideas and jokes exactly in the places where I had put jokes that proved untranslatable.

So obviously I have many reasons to be grateful to Carol. I am beyond grateful that she decided to publish my books in the US and that she chose to translate them herself — a fantastic privilege. But I am also grateful for her friendship and her continuous presence in my life. I am grateful for our ongoing conversation, which has by now stretched over seven years and I am sure more than a thousand e-mails, some of them quite short, some just a line or a single word, but each of them has made my life funnier, brighter, more joyful. I am also grateful for all the plays we went to see together, who had the effect of rekindling my love for theatre and inspired me to try my hand at writing for the stage myself — which Carol reacted to by deciding to translate my first play, without being commissioned by anybody, just out of interest and solidarity and friendship.

And of course I am grateful for the education I received from her about the weird business we find ourselves in. I can safely say that I learned more from Carol about the mechanics of the publishing world than I would have gotten out of all the books ever written on the topic. And I am grateful for her readiness to do unexpected and slightly surreal things — like turning up at the strangest literary festival ever, surrounded by geysers, desperate writers and weird finger-food, or travelling all the way to my first theatre-premiere in what proved likely to be Europe’s only city without a single bar.

But above all I cannot even begin to express the amount of my gratitude, of our gratitude — I am sure I can speak for all the writers who have been translated by her, like Bernhard Schlink, Hans-Ulrich Treichel, Margriet de Moor, Yasmina Reza and Thomas Bernhard … well, maybe not Thomas Bernhard, gratitude wasn’t something he might have been very interested in. So I cannot even begin to express the amount of gratitude I feel for her turning my books into her books, making them our books. To receive her friendship without getting the assistance of her talent would be a lot, as would be to get the assistance of her talent without her friendship. But to have gotten both is something I count among the great gifts of my life. Thank you so much, Carol. This is a great prize, and there is no one who deserves it more than you.