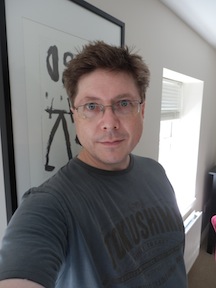 Angry Robot, part of the Osprey Group, is the creation of one man and many minds working in tandem. NOTTINGHAM: UK-based independent genre publisher Angry Robot, despite lacking the deep pockets of your traditional book giants, has carved a unique niche for itself. Launching in summer 2008, its list includes an impressive line-up of authors including Lauren Beukes, Adam Christopher and KW Jeter. Angry Robot (AR) has also launched two separate imprints, Strange Chemistry, which focuses on young adult science fiction and fantasy, and Exhibit A, its crime fiction line. In a market where the monolithic publishers seem to be struggling, this company punches above its weight and uses social media to draw attention and market its products in a very successful way.

Publishing Director Marc Gascoigne has an interesting CV, he informs us when we ask about his background in publishing.

“In 1980 I was a fanzine editor, speciality taking the piss out of Games Workshop. Then from 1984 I was a games developer/editor for Games Workshop,” he recalls mischeviously.

“In 1987, I was a freelance writer of Fighting Fantasy books (created by GW’s founders), then in 1989 I became a consultant editor for Puffin on FF, freelance writer of teenage fantasy books, games and computer games. In 1997, I rejoined GW to help set up Black Library fiction line. Back in 2008. I set up Angry Robot under the aegis of HarperCollins and then in 2009, I moved AR to the Osprey Group.” (Read more about Osprey Group in today’s feature story: “Osprey Takes Flight on Brands, Tribes, Clonefiles and the Crowd”.)

“People will always want stories. All that’s changing are the formats.”

Unlike the traditional publishing model, Angry Robot operate out of a number of satellite offices in the UK and US. But this wasn’t a conscious decision, Gascoigne informs us.

“It was more practicalities, that turned into massive cost savings, and then became a necessity. HarperCollins were and are based in Hammersmith, but I was living in Nottingham and wasn’t going to move. The option was to commute, but when we looked at what was needed in terms of face time, it boiled down to one meeting every 2–4 weeks. Offices are cheaper here, and telephones still have their uses. Nowadays we keep that going, with staff in Brighton and Manchester, and our group HQ in Oxford. But all it really takes are regular meets on the conference phone and Skype, and occasional get-togethers. We have a colleague in the group’s New York office now too, so the distance thing is forced on us there regardless,” he shares with us. Angry Robot specializes in genres rather than a broader list, and in this case, this is a choice that is deliberate.

“It’s all about the customer, the reader. Genres are founded on enthusiasts, dedicated superfans, and if you can make books for those readers you have a strength that will outlast any fads or fashions,” Gascoigne shared with us. “I’m a fanatical reader of crime, as well as SF and fantasy, so I could see the most dedicated crime fans share many of the same characteristics of the SF fans.”

The publisher has had a presence in the UK for a number of years but it is also starting to making serious headway in the US. Tackling this other territory does throw up a few problems but nothing that worries Gascoigne and AR.

“We had our best year so far in the US in 2012, and more than half our sales are there. It creates some challenges – some of our books have rather UK- or US-centric covers, for example, and of course some are set in one or other country so will find more or less favor. But the advantages of co-publishing far outweigh minor localization questions,” he told us confidently.

As a grass roots publisher, whose staff are as much fans of the material as the people who buy their books, using social media like Twitter and Facebook as cannily as possible is part of the key to their success.

“No one on the team forces themselves to tweet or whatever, we just can’t stop ourselves. It doesn’t hurt that rather than having a separate marketing it’s all us, so we respond, debate and are generally part of the community…but that’s how it should be anyway. Fans as well as publishers, full of enthusiasm for books (from other publishers as well as from us) and heaps of other cool things,” Gascoigne reveals.

Despite the fact that it is a very challenging market out there at the moment, he feels positive about Angry Robot’s future.

“People will always want stories. All that’s changing are the formats, and of course we’re currently right in the middle of a massive, massive format change. We’re not beholden to a vast organization, and have no need to book strategy meetings months in advance. If it feels good, we do it, so our speed of response makes us nimble, while the backing of our group and the help of our partners (notably Random House in the US) gives us strong foundations. Things are changing rapidly, and so are we.”