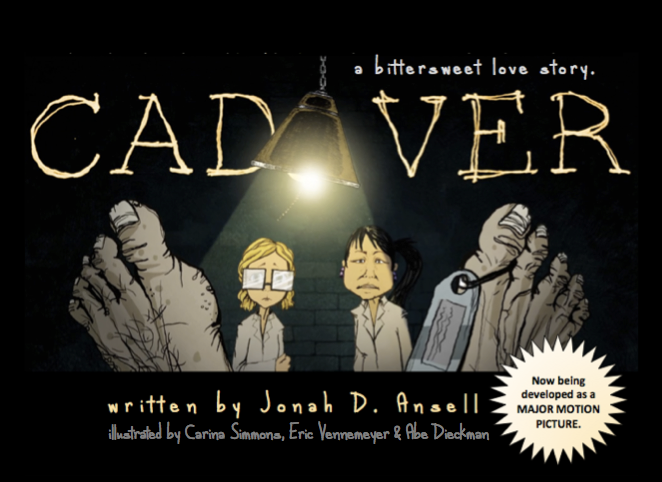 Last August, I was invited to attend a screening of a short animated film called “Cadaver.” Set in a medical school anatomy lab, it is a love story about a cadaver who wakes up and begs the medical student to help him say a last goodbye to his wife.  Tomorrow, for Valentine’s Day, Cadaver will be released as a graphic novel by Academy Chicago.

Crossmedia has been a buzz word throughout the last few years as book publishers attempt to strengthen the bond between the book, film, and gaming worlds.  Generally the story begins as a book and is then adapted for film, but not in this case.  Could “Cadaver” be among the first “film to book” conversions?

Jonah Ansell is the writer and director behind Cadaver.  The story began with a frantic email from his sister who was in medical school.  “They were making the med students do some sort of creative assignment, like, ‘tell us what you think this cadaver’s life must’ve been like, write a haiku, or draw a picture,’ I think it was intended to get the kids to realize that the body that they were going to spend the next semester dissecting was once a living, breathing human and that they needed to treat it with respect. So, I wrote this little poem, a love story in fact. I didn’t think anything of it. I went on with my day. In fact, I think a whole year went by. But something in the story kept drawing me back to it.”

With an MFA from USC’s School of Cinematic Arts and working as a writer and director for film, beginning with the creation of a short film made the most sense. Ansell worked with his producing partner and created this illustrated short with actors Kathy Bates, Christopher Lloyd, and writer and musician Tavi Gevinson.

But, the film wasn’t the end of the story.  “Even though film is a visual medium, there was something about the lyrical, rhyming nature of the story of Cadaver that made me think it could work equally well — or even better, as a book,” said Ansell. “The story began as text — and as a creator — I had to ask myself what was the most appropriate and effective medium through which I could bring that text to life. The film is a wonderful experience, but the story quickly flies by, and doesn’t always give the viewer as much time as they may like to sit with and explore each moment of the story. As a child, I recall the joy of getting to linger on the words and images of Shel Silverstein, not wanting to turn the page until I had fully examined every inch of the canvas. We sought to create that same curiosity and wonder in turning the film into a book.”

As filmmakers adapt books to feed a moviegoer’s interests, so can a publisher adapt a film to appeal to a reader.  Could publishers take popular characters from film and extend their story in a novel or series of novels? Will we see more projects like this going forward or will the book to film channel always be the dominant direction?

The story for Cadaver isn’t over.  “We are currently shopping the feature film to Hollywood studios and are thrilled that Kathy Bates and Christopher Lloyd have expressed interest in returning for the feature. We aim to turn the film into the next Nightmare Before Christmas, and bring the story to life as an animated musical. My scorer Chris Thomas and I have already started writing music, but we still need a big name Executive Producer with deep Hollywood pockets to help us put it into production.”