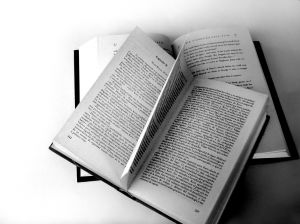 A year ago, I wondered if Barnes & Noble could boost its stock price by dropping the word “booksellers” from it’s official name. Wall Street certainly might like it. After all, the it does make sense—today at B&N you can buy speakers, handbags, crock pots, yoga mats and all other manner of items. “Bookseller” is a convenient, if somewhat antiquated branding.

Of course, you might also say that it is a “brand differentiator,” in so far as it maintains and identity for the company from other retail competitors that sell an equally wide myriad of titles. And, naturally, books still are B&N’s core product.

But what if we extended this thought experiment to the entire book business. What if the publishing industry simply stopped using the word “book” to describe its end product. Would this simple change in thinking inspire a revolution in the way publishers look at their jobs.

The change is already happening. At this year’s ongoing Digital Book World conference you rarely hear the use of the word “book” as such. You hear “ebook,” certainly, as well as “print” and “digital” and “format.”

The word “content” echoes through the halls. Rarely still, “IP” — which is how James Frey describes the stories that his company, Full Fathom Five, develops.

Does the word “book” encumber the industry with too much history and tradition for it to move forward with the speed demanded by our new digital world? The words one chooses to describe oneself imply an awful lot about the person at hand. Would this simple alteration change our thinking for good? Or would it simply cause us to lose our identity?

As I said, it’s a thought experiment.