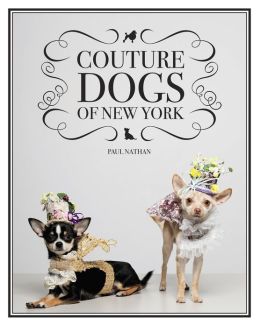 Paul Nathan is a New York City-based photographer and author. His recently published book, Couture Dogs of New York , documents the dog moms and dads who dress up their “fur children” and parade them around New York City, oftentimes in matching outfits. It offers a visually fascinating, if eyebrow-raising, look into this subculture. But this isn’t Nathan’s first dalliance with one of New York City’s quirky subcultures. Last November, I had the opportunity to join Paul as he celebrated the release of his first book, Generation Ink: Williamsburg, Brooklyn. The event took place in the seemingly buttoned-up venue of the 16th floor of the Saatchi & Saatchi building.

Yet, as you might have expected, it was filled with beautiful, fashion-forward, tattooed people (many of whom were featured in Paul Nathan’s book) who made the space their own. In addition to near life size blow-ups of Nathan’s black-and-white photographs displayed on light boxes, the room was outfitted with a suite of Martin Basher’s paintings and the festivities were accompanied by live rock from The Dough Rollers, cocktails from Sailor Jerry Rum, beer from St. Killian’s, and a make-shift tattoo parlor in a conference room featuring the artists from Magic Cobra Tattoo Society. Once I finally had a chance to track down Nathan, I asked him a few questions about his book. Why tattoos? I wanted to know, and he had a very simple answer: “because they’re beautiful and interesting.” He and his wife live in Williamsburg, where he realized that the new project he was looking for was right there on his own doorstep — hundreds of young people in Williamsburg walking around with art all over their bodies.

Nathan considers himself somewhat of an outsider to the whole tattoo culture, since he identifies with a slightly older crowd than most of the inked-up youths in his book, and wanted to make sure someone documented this moment in time— and so he provided a “snapshot of youth and tattoos.”

You can check out all his work online at http://www.paulnathanstudio.com/.