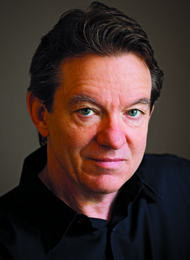 Lawrence Wright is the Pulitzer Prize–winning author of The Looming Tower, a book about the origins of Islamic religious fundamentalism and the terrorist group al-Queda. He’s not shy to tackle difficult, complicated and controversial subjects; and he’s no hack. His new book — Going Clear: Scientology, Hollywood and the Prison of Belief, published January 17 in the United States by Knopf — takes on a subject as potentially fearsome: the church of Scientology.

The church is renown for intimidating would be whistle blowers, journalists and other potential detractors into silence, leaving relatively little published about the Church and its inner secrets. Wright’s book promises to be the most revealing yet. An excerpt published in The New Yorker, where Wright is on staff, documented some of the long, arduous meetings the magazine had with the Church in the run up to publication. You can bet that Knopf and Random House’s legal team has done the same (though are likely still holding their breath). Yet, in the UK, Transworld — like Knopf, a division of Random House and part of Bertelsmann — recently cancelled publication of the book, the details of which are explained in today’s feature story.

But, despite the risks, should Transworld have gone ahead with publication?