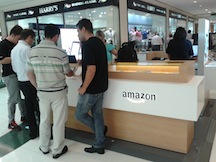 Several recents articles, including this one in the New York Times, point to a trend of online retailers opening physical stores. The Digital Book World news site recently suggested that the trend would also catch on with the publishing industry. Well, the Brazilian publishing market might be leading this trend: on Tuesday, the giant retailer who recently arrived in Brazil, Amazon, opened a pop-up store at a shopping center in São Paulo and two in Rio de Janeiro to sell its Kindles. Amazon has added retail kiosks as a physical sales channel for Kindles in Brazil.

The kiosk is a partnership between Amazon and Superfones (“Superphones”), an e-commerce retailer of mobile phones and technological goods, with no bricks-and-mortar stores of its own. It was Superfones who sought out Amazon’s Brazilian wing and suggested the idea of kiosks to sell the ereaders, one of which now shares a hall with one of Amazon’s competitor, the bookstore chain Saraiva. The Kindle model is the same being sold at bookstores Livraria da Vila and retailer Ponto Frio, Amazon’s retail partners in Brazil.

Only four Kindles and four covers were sold on the store’s first day, but expectations are high. “We have to sell 1,600 units per month for the investment to be worth it,” said Iliana Ferrarese, coordinator of the kiosks in São Paulo. “This pop-up store is a pilot project, but next Thursday, 24/01, we will open another one in São Paulo, at Shopping Iguatemi,” stated Ms Ferrarese.

The coordinator explained the importance of Amazon physical stores for Kindle sales in Brazil. “People already have virtual access to the Kindle site, but here they can see and touch the devices and ask questions. It is more tête-à-tête” she said.

Also this week on PublishNews Brazil:

Kobo Launches Glo and Mini Ereaders in Brazil
Kobo lurched ahead of Amazon once again in Brazil, launching two new e-readers, which means they now sell both the cheapest and the most expensive devices in the country.

33% of Brazilians Bought a Book Last Month
According to a study by Target Group Index, 33% of Brazilians read a book (any book) in the last 30 days, with high percentages in Belo Horizonte and Porto Alegre.

PublishNews Brazil, a collaboration between Publishing Perspectives and PublishNews, brings you all the latest news from the booming Brazilian book market. You can subscribe to the weekly email newsletter here.