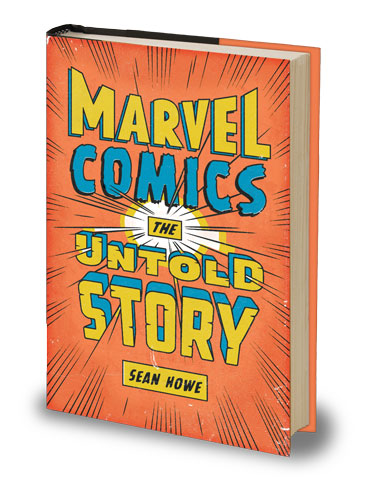 The comic book business has always been ramshackle, but as sales decline the industry makes billions in movies and merchandise. In the last ten years, mainstream publishing has witnessed the rise of a curious new subgenre: serious books on the cultural history of comics. Obscure lore hitherto known only to fans is now sold by the Big Five. For instance, in Men of Tomorrow (Basic Books, 2004), former Batman scribe Gerard Jones told the origin story of American comics, a surprising tale involving gangsters, pornographers and the disastrous business decisions of Jewish kids like Jerry Siegel and Joe Schuster, who created Superman and then sold the rights for pennies.

“…today the top-selling comic books in America struggle to sell more than 100,000 while most sell far fewer.”

In The Ten Cent Plague (FSG, 2008) David Hajdu explored the moral panic surrounding EC horror comics in the 1950s, while in Comic Wars (Broadway, 2002) Israeli politics expert Dan Raviv turned his attention to how onetime Revlon owner Ronald Perlman made a complete mess of Marvel Comics in the 90s, leading ultimately to the firm’s bankruptcy. In 2008 Abrams published Kirby: King of Comics a coffee table art book dedicated to the co-creator of the Hulk, Fantastic Four, Thor and Captain America. Serious graphic novels by Chris Ware (Pantheon) or Marjane Satrapi (Pantheon) now get reviewed in The New York Times while Michael Chabon won the Pulitzer for The Amazing Adventures of Kavalier and Clay (Random House, 2000) a fictionalized account of the lives of comics creators in the ’30s and ’40s.

And so on. And now we have the latest addition to this ever-expanding list — Sean Howes’ Marvel Comics (HarperCollins, 2012), an “unauthorized biography” of the publisher of Spider Man, The Hulk, The X-Men, The Fantastic Four et al. It even comes with approving back cover copy not only from the likes of perennially obliging glib quote-robot Chuck Klosterman but also a certain Jonathan Lethem, author of Omega the Unknown (Marvel Comics, 2007-2008).

Thus meta-material about what was once a trash medium is today not only profitable, but respectable. How times have changed, and readers need look no farther than Howe’s Marvel Comics for evidence. The company was established in the early 1940s by Marvin Goodman, a publisher who specialized in cheap knock-offs of popular ideas. Thus when he saw the success of National Periodical’s Superman and Batman, he established his own line of superheroes, the first of which were Namor, The Sub-Mariner and The Human Torch, both of whom still feature in Marvel comics today.

When superheroes went out of fashion, Goodman dabbled in monster stories, romance or westerns — whatever would turn a quick buck. When superheroes came back into vogue in the early 60s Goodman told Marvel’s sole staff member Stan Lee to come up with something. Collaborating with Jack Kirby, Lee created The Fantastic Four, The Hulk and Thor, while with Steve Ditko, he created the phenomenally popular Spider Man. The licensing possibilities for small boys’ underwear would never be the same again.

“mainstream American comics have become a bizarre ghetto for ageing nostalgics who can’t let go of the characters they loved as 8 year olds.”

The most amazing thing in Howe’s book however is the detail on how ramshackle the Marvel Comics operation remained for so long, even as its characters became famous worldwide. By the end of the 1960s, Stan Lee was winding down his involvement with the characters while Kirby and Ditko had both quit the company in disgust. The result was that fans in their early 20s took over as writers, artists and (why not?) as editors-in-chief. Howe has a special fondness for the Marvel comics of this era, and provides immense detail as to how writers and artists smuggled in counter culture themes. But trust me: 40 years later, they’re nowhere near as good as he makes them sound.

Perhaps the apex of lunacy arrived when an ex-Rolling Stone writer named JM DeMatteis decided to have the lucrative IP Captain America quit, denounce the historical crimes of America, die, and then be replaced with a Native American. Incredibly, DeMatteis was outraged when editor-in-chief Jim Shooter nixed the idea. Can you imagine Carl Barks trying to get a story past Disney in which Donald Duck dies as a result of an oil spill after which Mickey Mouse becomes an environmental activist? I don’t think so: but at Marvel, the fans turned professionals felt ownership of the characters they worked on.

Stan Lee went to Hollywood where he spent three decades failing to score any big movie deals; Jack Kirby died embittered at his treatment by the firm; and Steve Ditko turned to publishing bizarre Randian tracts in tiny print runs. By the 1990s, Marvel was fuelling a weird spectator boom with multiple covers on new first issues of comics that they printed by the million and which were obviously never going to be worth anything. A couple of disastrous business decisions later and they went bust, only to be bought over by Ike Perlmutter, an Israeli toy manufacturer who had begun his business career in America in the late 1960s, when he was paid to recite Hebrew prayers at Jewish funerals.

Today the business end of Marvel has improved immensely. Perlmutter sold Marvel to Disney in 2009, becoming one of the largest single shareholders at the House of Mouse in the process. Marvel has become a movie and merchandising behemoth, responsible for celluloid mega-hits such as Iron Man and The Avengers (Spider-Man and The X-Men were licensed to Sony for risible sums while the publisher was still a gimcrack operation).

The Future of Comics is Murky

In short, the company is worth billions; or at least the movie/merchandising wing is. As for the publishing end, it’s a microscopic part of Marvel Entertainment these days. Whereas in the 1980s, The Uncanny X-Men sold around half a million copies a month, today the top-selling comic books in America struggle to sell more than 100,000 while most sell far fewer. Total sales estimates for the top 300 comics as of October 2012 were around 7,381,572 copies — up 869,616 units on September but down by 210,379 units from October 2011 — and this in spite of the massive success of The Avengers and The Dark Knight movies that were such big summer hits. Thus the overall sales trend remains downwards. The publishers complain of too much competition from other forms of entertainment — such as video games, movies and the Internet. But that hasn’t stopped books such as the Twilight or Harry Potter series from reaching huge readerships — and they don’t even have pictures.

No: the truth is that mainstream American comics have become a bizarre ghetto for ageing nostalgics who can’t let go of the characters they loved as 8 year olds. They want stories featuring superheroes originally intended for children’s entertainment that 30 and 40something males can appreciate. This is a phenomenon covered in Howe’s book, and readers who think of Nick Fury as the character played by Samuel L. Jackson in The Avengers movie may be startled to learn that a few years ago the print version of the agent of S.H.I.E.L.D. throttled an enemy with his own intestines. Howe doesn’t mention the time a naked, miniaturized Ant Man emerged dripping from between his wife’s legs, declaring “Your turn.”

And this, in turn brings us back to where we came in — why are big publishers churning out serious books on comics now, when sales of the comics themselves are in long term decline? Ironically, I suspect that this Golden Age of historical surveys represents another aspect of the mainstream comics industry’s senescence. Who, after all, is the audience for gossip about comics legends such as Steve Gerber, Jim Starlin or Jim Shooter? Why, it’s 30 and 40something males who were collecting in the 1970s, 80s and 90s. You know, people like Jonathan Lethem, and Michael Chabon, and me. That said, if you were around in those days then Howe’s book certainly is a lot of fun.

DISCUSS: What is the Future of the Comic Book Format?