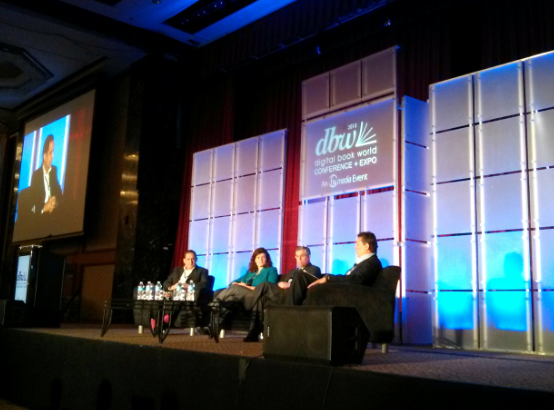 “We are in this new paradigm: marketing directly to consumers,” said Gary Gentel, President of Houghton Mifflin Harcourt at this morning’s Digital Book World Conference. He was joined by Marcus Leaver, CEO of Quarto, and Karen Lotz, President and Publisher of Candlewick. Of the various topics addressed on the panel, the three CEOs spoke of direct-to-consumer sales and marketing as both a big challenge and an even bigger opportunity. Publishers have traditionally reached consumers through an intermediary, like a bookstore. But Leaver predicted that less than 15% of sales would come from bookstores by 2014. As shelf space shrinks across the globe, publishers are constantly looking for new ways to reach readers.

One part of the equation for each of the panelists is app development. A couple years ago, the publishing world had high expectations that apps would generate new revenue. As of today, Leaver said that their apps have not been big money makers, but do serve as good marketing tools to reach the large number of tablet users. Quarto’s apps create “stickiness” among readers, he said.

Both Gentel and Lotz told the audience that their companies will also continue to create apps, but without expectations of great revenue. Instead, Gentel said, particularly for education and ESL brands, he has partnered on development with overseas tech companies who have a robust knowledge of the digital environment in order to reach new readers.

Lotz told the audience that direct-to-consumer sales differs between the US and the UK. As Walker Books, her UK site does sell a modest number of books to consumers. In the US, however, the administrative requirements have put a strain on the mid-sized publisher. But she is optimistic that the strong Walker Books brand in the UK and Candlewick in the US will draw consumers to the websites.

Gentel also has his sights set on improving the HMH website, and that means offering interesting content about the books and authors, as well as a number of buying options. He said the company is investing in web development in order to provide a “robust” site that offers something for buyers, browsers and industry professionals.

Leaver, on the other hand, said, “we need more than a good website because we will never have a site as good as Amazon.” His approach? Developing vertical communities and finding informed community managers who can hand-sell to key retailers and consumers.

Despite the many opportunities that the internet and digital content provide to reach consumers, the panelists all certainly agreed with Gentel when he said that direct-to-consumer marketing and sales “is not an easy thing to do.” But as the industry has now settled more comfortably into its digital habitat, 2013 could be the year that publishers refine their businesses and take ownership of the relationship with their readers.