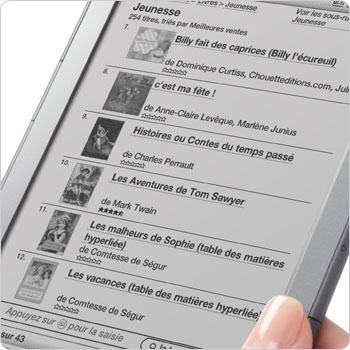 The headline in the New York Times said it all: “Barnes & Noble’s Strategy is Questioned as Nook Sales Decline.” As the article explains, after a full year of making clear its commitment to building its business through its Nook division, the company’s announcement of disappointing holiday sales was “enough to raise questions about the company’s ability to pull off the transformation from its traditional retail format.” Tablets are more appealing to many people than are ereaders, especially in developing digital markets like France.

The numbers speak for themselves. Retail sales at Barnes & Noble bookstores and from its website, BN.com, declined 10.9% from the comparable holiday period a year earlier. Sales in the Nook unit, including ereaders, tablets, digital content and accessories, decreased by 12.6% over the same period.

The Times cited Mike Shatzkin, founder and chief executive of Ideal Logical, a publishing consultant. “They are not selling the devices, they are not selling books and traffic is down. I’m looking for an optimistic sign and not seeing one. It is concerning.”

It was perhaps even more concerning, given that the decline came despite a 13% increase in sales of digital content, which would seem to indicate that it is weak demand for Nook devices themselves that is dragging down the division’s performance. And while other companies do not make public their numbers, analysts believe that sales of both Amazon’s Kindle Fire and Apple’s iPads appear to be strong.

“The problem is not whether or not the Nook is good,” said James L. McQuivey, a media analyst for Forrester Research. “What matters is whether you are locked into a Kindle library or an iTunes library or a Nook library. In the end, who holds the content that you value?”

The Times goes on to say that “The most intriguing, and troubling question is whether the company can stay in the digital device business at all over the long run,” and posited that options for B&N could include strategic partnerships.

The same day as the Times article, The Wall Street Journal asked in its headline: “The E-Reader Revolution: Over Just as It Has Begun?” The paper reports that market researcher IDC recently estimated 2012 global ereader shipments at 19.9 million units, down a startling 28% from 27.7 million units in 2011. In terms of contrast, IDC’s 2012 tablet forecast is 122.3 million units.

The problem? According to the Journal, one reason for the decline is that people who bought ereaders are in no rush to buy another. One devoted Kindle user is quoted as saying, “It works fine, I really have no reason to get a new one. If I did ever want to upgrade, it would probably be to a tablet, like the Kindle Fire.”

And while, the article acknowledges, ereaders were a true innovation, giving consumers a digital bookstore in their hands, today’s consumers are more likely to read e-books on tablets rather than ereaders.  According to a recent Pew Research Center report, 23% of Americans said that they had read e-books in 2012, compared with just 16% in 2011.

And since increasingly lower priced tablets can be used not just as readers, the trend away from single use ereaders should only increase, according to Tom Mainelli, IDC’s tablet research director.  “For most consumers, a multi-use tablet is a better fit, particularly at the price points at which tablets can now be had. Ereaders will eventually become a niche product.”