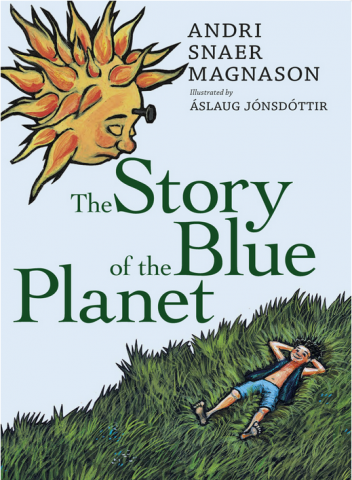 When Seven Stories Press launched Triangle Square, its imprint of books for young readers in the fall of last year, its aim was simple: to bring its signature mission of combining social justice and good story-telling to a reading audience of young adults and children. So it seems only fitting that one of the first books it published was Andri Snaer Magnason’s The Story of the Blue Planet, a worldwide bestseller and the first children’s book to receive the Icelandic Literary Prize in addition to the West Nordic Children’s Book Prize. The book tells the story of two best friends, Brimir and Hulda, who live on a small island on a blue island on a beautiful blue planet where there no adults and only children, whose lives are thrown upside down when an adult named Gleeson Goodday crashes on the beach, and promises to make their lives a hundred times more fun…with disastrous results to both the children and the planet.

The Story of the Blue Planet, which Morgunbladid (Iceland) said about the book that it “can be read on may levels: as pure fairytale, a contemplation on ethics, a fable or entertainment…There is one word that encapsulates everything that this story is: genius,” is, I think, a contemporary The Little Prince. It can be read simply as a hugely entertaining tale, or as a parable or fable about our planet, environment, and ethics, appealing to children and adult readers alike.

It was, according to Magnason, a book that was, despite its brevity, a long time in the making: The inspiration came from many directions. I was thinking a lot of the most memorable stories of my childhood and events that really stuck in my memory: some of the literature that has inspired me most as a writer from Icelandic folklore to classic Grimms tales to “Alice in Wonderland” and the stories of Astrid Lindgren. Then I was reading some new stories for my son, many of them were very boring, thinned out versions of the classics, and I wondered how sad it was, to be bored reading for my child.

So I started thinking about making my own story. I was working in the Iceland University archives a whole summer listening to old tapes with women born in 1880 swing sweet songs but also quite dark lullabies. They had endless thrilling elements that had been erased from the newer books. I started making my own story and put into it incidents from my daily life. My grandmother gave me a Teflon coated frying pan, and after the first meal I cooked I noticed half of the Teflon had peeled off into the meal. I imagine what might happen to me, maybe I would have to take a bath again. A door to door vacuum cleaner salesman sold my other grandmother a 3000 dollar vacuum cleaner. He was considered a very successful salesman, not a scoundrel. So I created a planet and gave some children the ability to fly. But nothing happened until this vacuum cleaning salesman came and offered endless happiness and sunshine by putting a nail in the sun. Then I found out that I had stumbled upon a parable that was almost like a theory of everything on this planet. About greed and manipulation, the good and evil in everyone, war, democracy and inequality on a planetary scale. It surprised me how all these themes had the roots in one action, the nailing of the sun, and they unfolded naturally as part of the plot rather than themes being squeezed into the story. That was something I never imagined I could write about in a children’s book. I understood that this was a powerful metaphor and I had to take the story seriously and make it as good as I could possibly write. It took me two years to write it.

But here’s the question: The Story of The Blue Planet was first published in Iceland in 1999. Why did it take thirteen years for it to reach an English speaking audience? I had the opportunity to ask Maganson what he thought:

I am not sure. I was always sure it would eventually be published so I did not push it so hard when I was busy doing other things. The North American book market is not very open to translations. Only 3% of all published books are translated compared to 30% in Germany. A rather large publisher wanted to publish the book a few years ago but there is one small incident where the children in the book eat a seal, a scene that is kind of a tribute to my grandfather that lives in northern Iceland and ate everything that could fly, swim or run. (If he lay on his back long enough a bird would lay an egg in his mouth he told me.) The publisher asked me to take out every mention of seal eating and of children hugging. I thought it was a bit strange: no seals or hugging? I told them that the hugging was essential for the plot of the story, and asked what ugly unimportant animal should the wild children eat instead of seals. The publisher still insisted so I became a bit stubborn and asked when Northern American children should be told that seals are actually eaten by Greenlandic children. When they are fifteen or twenty-five? The publisher didn’t budge so I sent her a quick remix of the story where the children hug the seals but club their friends. I never heard from then again! So I told my wife that I lost the North American market but at least it would be published in Greenland.

In fact, it was translated to Inuit Greenlandic in 2002 and since then into 26 languages. Finally, Seven Stories Press sent me an email asking me about “Dreamland” my non-fiction political book. I sent them the Blue Planet complete with hugging and seals and they decided to publish it.

And now that it’s been published in English, my hope is that readers will want to read the book again and much later for their children. And maybe I hope they will understand how clever you have to be when you live on a planet. It’s quite difficult as the horizon is always so short and you can’t see the other side.