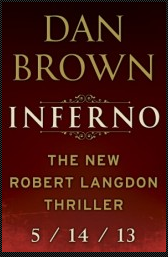 Brown hit worldwide bestseller status with his fourth novel, The Da Vinci Code, which turned the rather eccentric practices of Opus Dei — the secretive and powerful Roman Catholic fraternity — into a conversation starter around the globe and infuriating the organizaiton. Since then, Brown’s books have sold over 200 million copies worldwide.

His new book about Dante, Inferno, will be published on May 14, 2013 by Doubleday in the USA, and Transworld Publishers (a division of Random House) in the UK.

The book will once again feature Robert Langdon, the lead character in Brown’s earlier books The Da Vinci Code, Angels and Demons, and The Lost Symbol.

Brown told a Today Show television audience earlier this month that “will be set in Europe, in the most fascinating place I’ve ever seen.”  Transworld’s press release revealed a little bit more, making it clear that the book will revolve around one of “history’s most enduring and mysterious literary masterpieces,” without getting into any specifics. So it was up to Amazon to spell out the book’s premise clearly:

In the heart of Italy, Harvard professor of symbology, Robert Langdon, is drawn into a harrowing world centered on one of history’s most enduring and mysterious literary masterpieces…Dante’s Inferno.

Against this backdrop, Langdon battles a chilling adversary and grapples with an ingenious riddle that pulls him into a landscape of classic art, secret passageways, and futuristic science. Drawing from Dante’s dark epic poem, Langdon races to find answers and decide whom to trust…before the world is irrevocably altered.

As Brown said in his publisher’s statement, “Although I studied Dante’s Inferno as a student, it wasn’t until recently, while researching in Florence, that I came to appreciate the enduring influence of Dante’s work on the modern world. With this new novel, I am excited to take readers on a journey deep into this mysterious realm…a landscape of codes, symbols, and more than a few secret passageways.”

And with an announced first printing of four million copies by Doubleday, hopes are high that this will be another runaway success for Random House as it prepares to merge with Penguin Books later this year. There is no word on how many additional copies of Dante’s The Divine Comedy will be rushed into print.