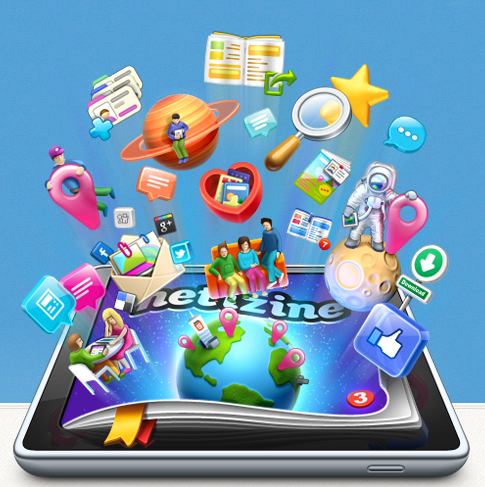 “Proactive editorial teams could make their magazines not only containers of content, but also hubs around which people can connect.”

“As a publisher, the reader is your most valuable asset,” said Jonathan Harris, CEO and co-founder of netizeen, as he talked about his past experience as a traditional publisher. “The reader was always left on the table, and leaving the reader on the table is, honestly, leaving money on the table.” Netizeen, a new tablet-based app that went into open beta late last month, allows users to read their favorite magazines while commenting, favoriting, rating and conversing, all in realtime. While that may ostensibly sound similar to the slew of social reading apps available on all manner of mobile operating systems, Harris insists that what netizeen is doing is indeed different, and very important to magazine publishers.

“Everyone always says they’re doing something different,” said Harris, laughing, in a phone interview. “But really, we are. We are totally focused on the audience. We’re not getting into the format conversation, we’re not getting into the content layer conversation. We are about building an audience around a demographic — a content interest. Publishers already have a social network, it’s just unconnected.”

Netizeen’s driving goal is to activate that dormant network, through a bevy of realtime social features embedded in the pages of digital magazines. One of netizeen’s draws is that it offers a single, seamless interface for readers: users can switch from commenting on a feature in magazine A to reading an interview in magazine B without exiting the app or even switching usernames. Regardless of the digital page being displayed, the social interface and overlay are constant.

And perhaps netizeen’s most promising feature is its potential for increased communication not just between readers, but between editors and readers.

“There’s no separate interface for editors,” Harris explained. “They just pick up their iPad and get involved.”

Through netizeen’s social features, Harris imagines that editors could transform the relationship between editors and readers from a one-to-many relationship into a plethora of one-on-one relationships. Proactive editorial teams could make their magazines not only containers of content, but also hubs around which people can connect. And it is those teams, Harris believes, who will have the greatest longevity.

Although it is not yet available in the beta, netizeen plans to roll out groups and event functionality in the near future, as well as a location check-in feature. These features will allow users to start conversations and discussions outside of the live wall — netizeen’s main level for interaction — as well as plan real-world events and meetups.

Right now, though, netizeen’s focus is on realtime connections between individuals. Said Harris: “Before we give everybody that smorgasbord of features, let’s make sure they’re talking to each other.”

Magazines are “social networks waiting to be unlocked”

When I asked Harris how netizeen was meant to work with magazine publishers who may already have their own social apps or differing mobile strategies, he acknowledged that it was a tricky spot to be in. But he stressed that netizeen was developed with simplicity in mind — simple to use, and simple for publishers to adopt.

“Our proposition is that what if enrichment isn’t the long play,” said Harris. “What if magazines are really great social networks waiting to be unlocked? Publishers should be able to do this concurrently with whatever else they’re doing.”

Harris once again brought up his background as a publisher while discussing netizeen’s ease of adoption. As a publisher, he said, he needed to know three things when it came to a new publishing platform: how much would he need to replace, how much would he need to invest up front, and how well would it co-exist with current strategies. With netizeen, Harris says he strove to answer all of those questions, and keep each answer as simple as possible.

While netizeen uses HTML5, it demands no significant technical investment from publishers. The vast majority of publishers, Harris surmised, already have and use the PDF format; netizeen converts those files for the publisher. The service is cheap for publishers to use, and it consumes what they are already producing, requiring no significant changes to production systems. Harris also wanted netizeen to provide publishers with a valuable asset that they would otherwise not get.

Netizeen both generates and packages that “meaty data” for publishers and advertisers.

At the moment, netizeen supports only the new iPad and the iPad 2. Harris expects that bringing the app to the iPad Mini shouldn’t be a problem. He was more cautious about providing a date for netizeen’s expansion to Android devices, giving a conservative estimate of early January 2013. Harris explained: “the ubiquity of HTML5 is a bit of myth. All devices, all browsers have their own issues.”

Harris also suggested that a rethinking of the magazine was in order. Rather than think of the magazine as an imperiled, legacy publishing format, one should think of it as something that could completely thrive in the digital age. “Magazines are superb content verticals, but they’re not getting the attention that they need. People are too distracted by the operating system, the file format.”

“This is a proposition that no one’s explored,” said Harris, of the magazine’s social potential. “We want to experiment with that – let editorial teams connect with their audiences. Let the audience evolve that conversation. We’re betting that a social experience embedded on the page has real potential traction.”

It remains to be seen, but Jonathan Harris could certainly be right.

DISCUSS: Should Book Editors Be Involved in Social Media Engagement?