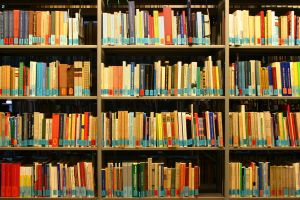 Writing for Forbes, David Vinjamuri gives the latest report that libraries and the big six publishers are at war over ebooks: “how much they should cost, how they can be lent and who owns them.”

At the heart of the issue is a seemingly simple question: Do libraries increase book sales or cannibalize them? Publishers, trying to come to terms with the rise of ebooks, the ever growing power of Amazon and the decline of bookstores are, as everybody knows, facing what can only be called uncertain times. And now there’s an additional worry — will library ebooks hurt their sales?

As Vinjamuri wrote, “They [ebooks] have less friction than physical books. When they speak of friction, publishers mean that borrowers don’t hold ebooks late, they arrive instantly for the next patron in line, they never wear out, and they don’t even require a trip to the library. To some extent, publishers may also see ebooks as a way to improve a situation that they were really never happy with: unrestricted lending of retail-priced books.”

Skip Dye, the VP of Academic & Library sales and marketing for Random House was upfront about his use of research to determine exactly how much friction exists in library systems. He told Forbes that while Random House is “format agnostic,” the company “went through and looked at our pricing and wanted to make sure that the right value conversation was happening between our library patrons and us. Some titles went up as much as 200%, some went down in price.” Vinjamuri adds that those who work for big publishers face another challenge that library directors do not: “layers of management that already believe that ebooks may kill large publishing houses and view their growth as more of a threat than an opportunity.”

On the other side though, the issue for libraries is simple: “They believe that withholding ebooks from libraries entirely, pricing them higher or limiting lends all undermine the library’s core mission.” Robin Nesbit of the Columbus, Ohio Metropolitan Library system reported that while her ebook circulation of 500,000 annual lends is only 3% of the system’s total, that number is growing by more than 200% a year. “Plus, it’s at least 10% of our budget,” she told Forbes. And as she pointed out, when you total up the cost of ebooks and the technology component, providing access to ebooks is three times as expensive for her as physical books.

In fact, of the six major publishers, four (Penguin, Hachette, Macmillan, Simon & Schuster) are not currently providing ebooks to libraries at any price. The other two — Random House and HarperCollins — do, but with differing strategies.

This year, Random House adjusted its ebook pricing:  the prices on some books were lowered, but the most popular titles increased in price, often by surprising amounts. Justin Cronin’s The Twelve, which sold in its print edition to Douglas County Libraries $15.51 from Baker & Taylor and whose ebook edition sold for $9.99 on Amazon, was priced at $85 to Douglas County on October 31st.

HarperCollins, on the other hand, sells its ebooks to libraries at consumer prices while limiting them electronically to 26 lends before requiring that the book be repurchased. Nesbit told Forbes that while that was fairer to libraries, “I get forty to fifty lends from a bestseller in library binding. But at least they’re playing.”

And that, says Vinjamuri, is the bigger problem. “The rest of the Big Six aren’t playing — at least not nationally. That’s a big warning sign for libraries, as fully 80% of lends — and an important part of their traffic — comes from bestsellers. While it seems likely that most of the other publishers will eventually play, the terms may be worse than those offered by Random House and HarperCollins.”

Vinjamuri attempts to get to the heart of the matter: “The argument between libraries and publishers has proven so difficult to resolve for a simple reason: a faulty paradigm in their negotiations. They are treating ebooks like physical property, not software. This compels them to create difficult and complicated schemes for reproducing the ownership experience. But the data to determine an equitable price to sell ebooks to libraries in this scenario are almost impossible to collect. So the sides remain deadlocked and guided by their own pre-existing beliefs rather than fact.”