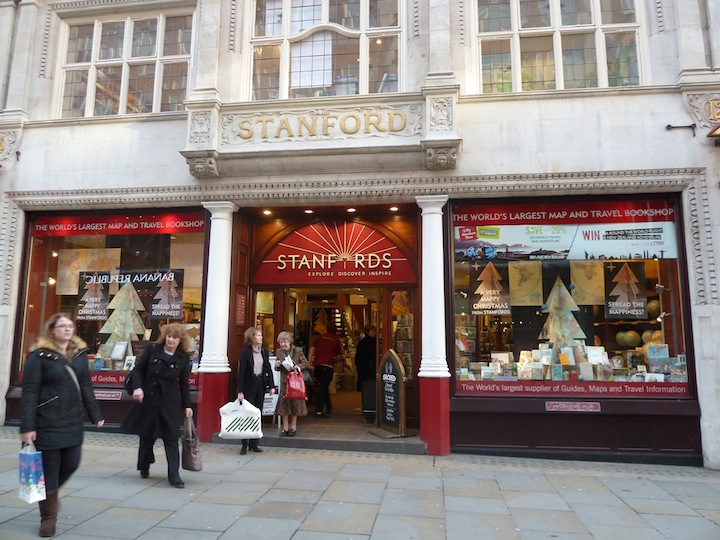 “You want to be advised by a real person — you want to go to a place where they understand books and where the recommendation is real.”

What makes a good bookshop? Should second-hand be in the mix too? Is a café important? How do you incorporate digital? Foyles’ clarion call at the Bookseller’s FutureBook conference in London last week seeks to answer some of these questions. The retailer has joined forces with the Bookseller to invite customers and industry experts to help design its new flagship on Charing Cross Road, which it will move into in early 2014. With discoverability of increasing importance, the timing couldn’t be more apposite. Everyone is agreed that bricks and mortar bookshops are under threat, but what elements are needed to make a physical bookstore survive in an increasingly digital world?

“This is a call for collaboration,” Foyles’ Head of Marketing Miriam Robinson told the conference. “This could be the last bookshop of this size to be built in the UK.” Philip Jones, editor of The Bookseller, said: “I do not believe the bookshop is dead, economically or in any other way. But high street shops are under severe stress: some of this may be down to recession, and some of it because of the shift to digital. Either way it needs to be addressed. Through this collaboration we will get ideas that we can then share with other booksellers.” The map of London on the floor of Standfords

What makes a bookshop memorable? What makes you tell other people about it? Often, it can be quite simple innovations. The floor at Stanfords Travel Bookshop near Covent Garden is a massive, enlarged street map of London. It’s a simple idea, but a cool one. Just down the road, the famous mind body spirit shop Watkins offers tarot consultations in the window — something unique to the physical store.

A quick vox pop of delegates at the FutureBook conference revealed plenty of ideas — as well as a list of favorite bookshops.

“Foyles has to create something that gives people an experience,” said former London Book Fair Director Alistair Burtenshaw. “It has to be a destination store, a shop in which people want to spend a considerable amount of time. It has to be an environment that adds value. When you make it a more personalized experience, you are happy to pay more.

“One of my favorite bookstores is Livraria Cultura in Sao Paolo, which is a total consumer destination. It’s in a converted cinema, so they have a theater for author events, a café, and they have a splendid atrium which has huge wooden dinosaur hanging from the roof — it’s a beautiful space.”

He also mentioned Mokba in Moscow “where they have multi-lingual staff and try and add value to the customer experience at every occasion.” Closer to home, he singled out the London Review of Books shopnear the British Museum, whose tables are perfect examples of discoverability. Appropriately, Faber’s Chief Executive Stephen Page, who won “most inspiring digital person” at the conference’s Innovation Awards, said that whatever Foyles did “they must create something online that is as good as the physical store — you have to do both.” His favorite bookstore is Shakespeare & Co. in Paris. “I’ve been going there all my adult life. There’s a romance about it — I’m more willing to discover things there even if I might see them somewhere else: there’s a seductiveness about it.”

Charlie Redmayne, CEO of Pottermore, believes — surprisingly — that a lesson can be learned from UK electronics retailer, Dixons. “Look at how they’ve thrived by improving their customer service — I think if you get that right, you can charge a premium. You need a store that stands up for selection, that finds the best books of real quality. You want to be advised by a real person. You want to go to a place where they understand books and where the recommendation is real, not the online version which is likely to be a self-published Amazon author. The interior of Shakespeare & Co. in Paris

“When I joined HarperCollins, I said to an editor that I liked Ken Follet’s Pillars of the Earth, that kind of thing. Straightaway she handed me the latest Bernard Cornwell and I ended reading all of them. It’s that sort of knowledgeable recommendation that you want.

“I think Barnes & Noble in Union Square is a wonderful shop. I think the way Barnes & Noble have combined physical and digital is very good — they’ve taken recommendation into the world of digital and got it right.

“There’s no doubt we’re going to have fewer physical stores in the future, so I think deciding to have a new flagship when so many stores are closing is fabulous.”

Paradoxically, if discoverability is important to the world of physical books, it is just as important in the world of apps. Dave Addey of Agant, whose company developed the acclaimed Malcolm Tucker: The Missing Phone for Faber, tying in with the hit BBC political comedy The Thick of It, said: “We only have one marketplace [the App Store], owned by one company [Apple]. Also, at the moment there is no way to ‘try before you buy’ when it comes to apps — you cannot try out the whole app, just a demo.

“So what I would like to see is a curated collection of apps on the devices in the store. I would also like to see the equivalent of Staff Recommendations for digital.”

His favorite bookstore is Blackwell’s in Oxford, “particularly the secondhand part. But really the whole shop — it’s like a museum of curiosities: it’s all there.” He also mentioned the splendid Norrington Room, in the shop’s basement, which once merited a mention in the Guinness Book of Records as the largest single room selling books.

David Taylor, Senior Vice President Content Acquisition International at Ingram, also listed Blackwells in Oxford among his top three, although first place went to Powells in Portland, Oregon. “They mix new and second-hand together which creates more serendipity. I think if you do that you attract the really heavy book buyer.” His third choice was Manhattan’s, Strand Bookstore, which was also picked by Hazel Cushion of Welsh independent publisher, Accent Press. She added: “They need to make the store welcoming to all generations and they need to entice even the non-readers. They need to take the fear out of entering a bookshop.”

Little Brown Publisher David Shelley, who is still basking in Casual Vacancy glory, was full of praise for the initiative. “That they are investing in such a big space is great news and it’s good that they want to work with publishers. I hope that there’s a strong digital element that links with their online platform, and I think how they use the architecture is key — they need to make a ‘wow’ space.”

His own favorites are both independents: the Dulwich Bookshop in south London, where he grew up, and the Limpsfield Bookshop in Sussex where he now lives. Not forgetting Daunts in Marylebone of course — “such a beautiful space: you’re seduced by the ambience.”

Daunts received several mentions, as it always does. Kate Beal at Walker loves it, as does Simon & Schuster UK’s Publishing Director Ingrid Selberg who said she always discovered new titles there. She wondered if Foyles should have a restaurant, not just a café, “something to make people go there.”

Sourcebooks’ Dominique Raccah was loyal to Anderson’s Bookshop, her local indie in Naperville, Illinois, and also mentioned Denver’s Tattered Cover and Shakespeare & Co. — “I was born and raised in Paris so that store has always meant a lot to me.”

A few other thoughts: Burtenshaw is keen on more themed displays of backlist, saying: “I remember Foyles on the South Bank once having a table full of novels featuring dogs. Promotions like that bring backlist alive.” Waterstones is good at doing this, and it has had writers’ tables in the past, where authors have picked their favorite books. Why not take this a stage further and ask writers for artefacts? Ian McEwan’s notebooks for example, or John Grisham’s old laptop, a print-out of an Alice Munro short story, Julian Barnes’ chair? We pore over literary paraphernalia in museums — Dickens’ letters or whatever — why not start asking for some of this now, from existing writers?

Such items could be displayed in the appropriate sections, or even in a mini Foyles literary museum. There’s no reason why Jamie Oliver might not happily donate some wooden spoons from his kitchen for the cookery department, or why Dav Pilkey couldn’t be asked for, well…his underpants. Why not? Wouldn’t kids love it if the creator of Captain Underpants had his own boxer shorts (washed, of course) displayed in a glass case?

At the very least, visiting authors could be asked to sign a wall or a door, as they do at the Harry Ransom Center at the University of Texas. Doubtless some of these things happen somewhere at bookstores already.

In the children’s department, why not a section of roller-coaster shelving, where the books might actually loop the loop? Or a perspective altering room, like those “crazy” houses at fairgrounds. And do any shops have bookshop sleepovers, like the museums do? It could be advertised as “go to sleep with a book.”

Foyles could create the single longest bookshelf in the world, snaking from floor to floor, up the stairs, and edged with flickering lights. Yes, a gimmick—but gimmicks get talked about and written about. And while we’re on gimmicks, why not bring back the Penguincubator, the paperback vending machine that briefly existed on Charing Cross Road in the Thirties. And, of course there is always the option to add an Espresso Book Machine.

Various delegates at the conference mentioned the attractions of second-hand. Why not embrace this at Foyles? In fact, why not have a room that is, well, a bit of a mess. A room that is designed to capture everything that people like about second-hand.

With digital, bookshops find themselves in an odd situation. It’s reasonable for a booklover to think, “Hmm. I love books, I love reading, I wonder which ereader I should buy? I know — I’ll ask my local bookshop, see if I can try them all out.” But of course, what you can’t do in a bookshop is try out all the readers because bookshops are tied in to various ecosystems and don’t want to promote someone else’s device.

Should digital be separated or should it be evident throughout the shop? When you pick up a hardback novel, should a shelf talker be telling you that you can get the digital version along with the physical copy? As Dave Addey of Agant suggests wouldn’t it be good to have “finished” copies of apps that can be tried on pre-loaded devices.

A café, or lounge areas, seems essential, despite the proliferation of such outlets in the high street. Waterstones’ bar at the top of its Piccadilly flagship is very appealing. Foyles will be moving into the former home of Central St. Martins College of Art and Design—perhaps it could acknowledge this heritage with a Sculpture Bar.

It will be fascinating to see what emerges. Ideas can be emailed to feedback@foyles.co.uk and 30 places are being offered for a workshop in February next with the architects Lifschutz Davidson Sandilands to design a bookshop of the future. You can register your interest at bookshopworkshop@foyles.co.uk. This could be the beginning of the industry’s bookshop.

DISCUSS: What Does the Bookshop of the Future Look Like to You?