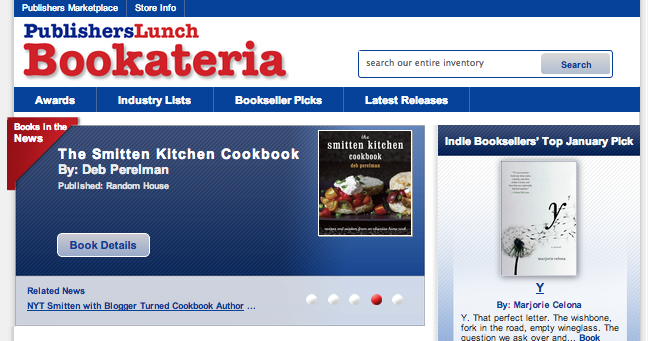 Michael Cader and Publishers Launch has opened Publishers Lunch Bookateria “book discovery” site, which features books for sale — from a variety of retailers, much the same as a service like Google Book Search — focusing on titles that are being discussed, reviewed and recommended by those in the industry and the media. The site is being powered by Random House, which is offering logistics and other back-end support. While its potential to become the “go-to” bookstore for a broad array of consumers looks to be limited, it appears to be a helpful tool for those in the industry as they seek out the titles they are reading about online.

Of course, this also raises one important question: if many people in the industry already get most of the books they want from their other friends in the business, who is Bookateria going to sell to?

Bookateria focuses on the book publishing professionals, authors, influencers and avid readers who already follow Publishers Lunch and PublishersMarketplace.com so closely, but is open to all readers, offering an “insider’s view” into books of interest and authors on the rise.

“We know from our readers that every new deal report and daily news item triggers purchase impulses among our audience, who are avid book consumers,” PublishersMarketplace.com and Publishers Lunch founder Michael Cader said. “So we’ve long been looking for a solution that lets us connect the news and our proprietary data directly to a store environment to drive book sales, while supporting the entire bookselling environment, without favoring any one party or competing directly with booksellers who provide such a valuable service.”

Bookateria features include “Books in the News” front and center every day, along with regular highlighting of books newly published, newly announced, and authors newly signed. “Industry Lists” gather “buzz books” and “best of 2012” selections from all over, alongside Publishers Lunch’s own aggregated lists, for the most comprehensive “best of the best” presentation anywhere. By drawing on the entire industry, Bookateria’s “Bookseller Picks” present customers with inclusive recommendations from a variety of booksellers — Amazon, Barnes & Noble, Costco, and the American Bookseller Association’s Indie Bound program — all in one place. Bookateria’s rich catalog also gives agents, authors, and others in the trade an easy place to link to in order to promote discovery and sale of their own books.