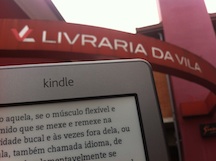 Amazon’s reluctant silence is finally over (for now). This Kindle has arrived in Brazil just in time for Christmas. And while Amazon launched its store two weeks ago, but only now Brazilians are able to buy the ereader, after closing a deal with Bookstore chain Livraria da Vila, a long-time competitor of Livraria Cultura bookstore chain, who partnered with Kobo earlier this year. Both bookstore chains are family-run, and while Cultura has 15 brick and mortar stores in eight different states, from the South to Northeast regions, Vila has seven stores, all located in the state of São Paulo, six of them in the capital. Kindle will be available in Vila’s stores starting next Thursday, December 20th, so devices will probably not be delivered to states further out in time for Christmas next Tuesday.

Nevertheless, this will probably not affect sales. The deal between Amazon and Livraria da Vila is exclusive for December and January. It will cost US$143, about US$50 less than Kobo Touch sold by Cultura.

Livraria da Vila is known to be a more traditional bookstore, investing less in massive expansion and online sales than its rivals, but according to its owner, Samuel Seibel, the digital reader is an opportunity to bring readers back to brick and mortar bookstores. “I am a steadfast paper book reader, it’s an unique smell and tactile experience. But, at the same time, the electronic book is here to stay. And I believe in the coexistence of the two reading platforms. And I believe we can bring back lost readers with new technology”, said Mr Seibel in a statement.

UPDATE: In addition to Vila, Kindles are algo going to be for sale online at Ponto Frio, an important electronics retail chain in Brazil. There, Brazilians can buy the basic  4th generation model Kindle, without 3G and touch screen, in 11 installments of R$ 24,92—or Us$ 11,75. The freight is free.