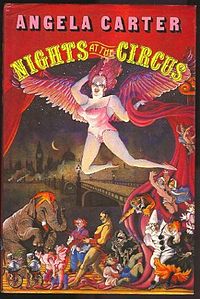 The James Tait Black Prize, Britain’s oldest literary prize, presented an award to the best novel to have won the accolade since it was first awarded in 1919. (That year’s winner? Hugh Walpole’s The Secret City.)

Six books were shortlisted for the award, being given to celebrate the 250th anniversary of English literature study at the University of Edinburgh: Nights at the Circus by Angela Carter (Penguin); The Heart of the Matter by Graham Greene (Penguin); A Disaffection by James Kelman; The Road by Cormac McCarthy (Vintage); Crossing the River by Caryl Phillips; and The Mandelbaum Gate by Muriel Spark.

The winner was Angela Carter’s Nights at the Circus, which one the James Tait Black Prize for fiction in 1984. The book focuses on the life and adventures of “Fevvers,” a winged circus performer who travels across Europe from London to the Siberian tundra. Judges said that it showed a “fabulous exuberance” with “wonderfully drawn characters” and writing which demonstrated “vitality, lightness, passion and fun.” On the other end of the spectrum, Nancy Huston, the award-winning novelist who had previously won France’s Prix Goncourt prize and was a finalist for Britain’s Orange Prize, has added another award to put on her mantle:  Britain’s Bad Sex in Fiction award, for her novel Infrared, (Grove Press) the story of a photographer’s sexual explorations.

Judges of the ever-so-tongue in cheek award, given by Literary Review magazine, said that they were taken by a description of “flesh, that archaic kingdom that brings forth tears and terrors, nightmares, babies and bedazzlements,” as well as a long passage that builds to a stunning climax of “undulating space.”

The Canadian author, currently living in Paris, was not present to accept her award. In a statement read by her publicist, the author said she hoped that her victory would “incite thousands of British women to take close-up photos of their lovers’ bodies in all states of array and disarray.”

Huston beat out a dazzling array of authors for the prestigious award, including Tom Wolfe, (the winner in 2004 for I Am Charlotte Simmons, Picador), Paul Mason, and Nicola Barker.

The award was established by Auberon Waugh in 1993 to draw attention to the “crude, tasteless, and often perfunctory use of redundant passages of sexual description in contemporary novels, and to discourage it.”

Previous recipients of the award include Sebastian Faulks, Norman Mailer, and John Updike, who was awarded a Bad Sex lifetime achievement award in 2008.