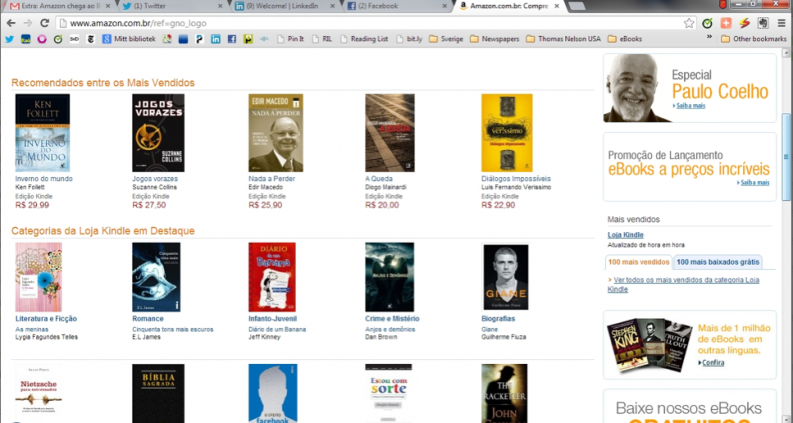 The beautiful Livraria Cultura bookstore at Paulista Avenue in São Paulo hosted a launch party on Wednesday to celebrate their partnership with Kobo. Actors were invited to read from Kobo devices and every digital enthusiast from the Brazilian publishing market was there. After all, Kobo was the first international company to set foot in Brazil with a national store and to sell devices locally. A screenshot of Amazon's Brazilian e-bookstore

But Kobo’s monopoly in Brazil lasted hours, as the serious competition looked to steal their thunder. And no, it was not Amazon, as had long been rumored, but Google, which actually started selling books at their local Google Play store at 11:45 p.m., Brasília time. Amazon would take another 35 minutes before its store went live.

Yes, in a single day, they all arrived.

Some, but not all titles available Books available online range from those of Companhia das Letras and Intrínseca, to titles from the almighty Digital Book Distributors, known as DLD — the consortium of 7 trade power houses whose tough negotiations delayed Amazon`s arrival.

One publisher whose books are not available is Saraiva’s, Brazil’s biggest bricks-and-mortar store and one of its most prominent booksellers. Not one of their 2,500 ebooks are on sale in their competitor’s stores — naturally, as the Saraiva group is also the main local competitor to these international brands, with their ecommerce, ebookstore and 102 brick and mortar stores.

Still, Amazon has nevertheless done what they can to win hearts-and-minds in the home of their namesake river: The Brazilian Amazon store is offering pride of place for the local bestselling legend Paulo Coelho, whose books are sold at special prices, ranging from R$ 2.99 to 14.99 (US$ 1.41 to US$ 14.07), while Ziraldo, another famous local writer, has been convinced to offer a title for free.

“Christmas is going to be great”

Brazilian publishers are very optimistic about the arrival of the international retailers and happy that the long negotiation process is over. “We went through a lot of details, because in digital business you have to foresee every possible situation, it took a long time to negotiate,” said Fabio Uehara, the executive responsible for digital business at publisher Companhia das Letras. “We are very happy that, after all the brouhaha, it has actually started: Kobo’s store is open, Apple’s etc. I think this Christmas is going to be great,” he added.

According to Fernando Baracchini, president of publisher Novo Conceito, Amazon’s arrival is a watershed: “There will be now a ‘pre-Amazon’ and a ‘post-Amazon’ period,” and the ‘post’ period will be better, it is a serious and competent company. I am not afraid, I am very enthusiastic about it.”