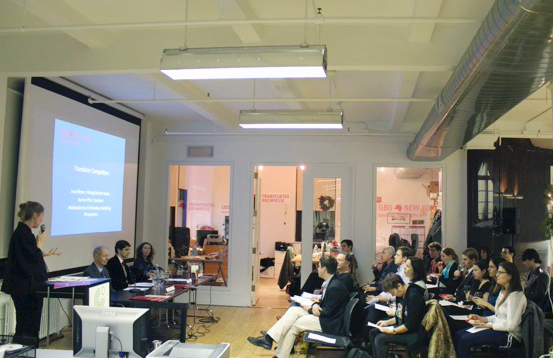 “At first, we were worried that all the entries would sound the same,” said Riky Stock, Director of the German Book Office New York (GBO), during an awards reception held at the Goethe-Institut on Wednesday night. “But no two sentences were alike. It was amazing how brilliant, how different all of the translations were.”

The reception was held to announce the winner of the first ever GBO Translation Competition to recognize young and aspiring German-to-English translators and to celebrate and discuss the art of translation itself. The winner of the competition was Kurt Beals, a PhD Candidate in German Literature and Culture at the University of California, Berkeley. Beals will receive a $600 commission to translate the first 15 pages of Nora Bossong’s novel Gesellschaft mit beschraenkter Haftung into English, and will be added to the Goethe-Institut & German Book Office translator database.

The competition, which was limited to translators who had no more than one translated book published in English, called for contestants to translate the first 700 words of Gesellschaft mit beschraenkter Haftung into English. The GBO received nearly 60 submissions, and took two separate rounds of judging to select the winner.

Translator Elizabeth Janik, who was named runner-up, will also be added to the Goethe-Institut & GBO database.

The evening began with a short panel discussion on the nature and current state of translation. Panelists included noted translator Burton Pike and Vintage & Anchor Senior Editor Lexy Bloom, along with moderator Edward Nawotka, Editor-in-chief for Publishing Perspectives. The discussion ranged from a perceived “creeping homogenization” of global culture and literature to the complications with having multiple translators working on a single title.

“Language and nation have become increasingly decoupled,” said Pike, who has tackled the works of Meier, Musil and Goethe, commenting on the fact that translators no longer appear preoccupied with the need to translate between cultures. “It seems to not matter anymore in what language a work was originally written.”

The panelists acknowledged that despite a growing international monoculture, books that were wildly popular in their home countries sometimes failed in foreign markets, and that it was often very hard to understand why.

“You want to strike a balance between unique to its culture, and relatable to [others]” said Bloom, whose focus as an editor is on international and translated literature. “And maybe there are things that are still culturally specific, like some genre fiction. You have to pick and choose what you think is best.”

The discussion also touched on the tendency of each new generation of translators to revisit canonical works, and how widely disparate translations of the same original work can be.

The GBO will continue to organize events and initiatives with the goal of highlighting new talent in the field of translation.