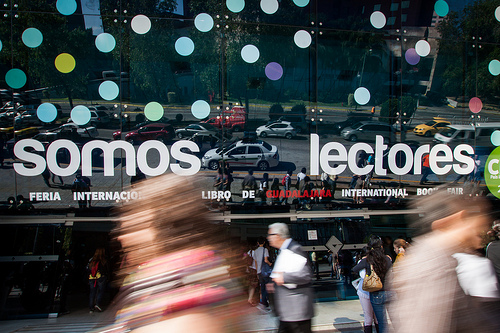 “The next step is to bring Cuban writers to markets where they have not been available. In this sense, the ebook is of phenomenal importance.”

Cuban production of ebooks will bring benefits to the isolated island’s publishing industry, by bringing the works of local writers to a wider audience, not only across the Spanish-speaking world, but also into the US, under the radar of the trade embargo.

"To read is to grow": The motto of Cuba’s publishers association

“We are interested in people reading more, and we are seeing that people are reading less on paper. Publishers at a global level have the same concerns, as more and more people use the internet, but we have to see this as a positive step for the industry,” Eduardo Fernández Collado, the president of Cuba’s publishers association told Publishing Perspectives.

Holding court at the Guadalajara International Book Fair, the chamber represents all of Cuba’s publishing companies, and organizes the Havana Book Fair, held annually since 1937. “We are seeing a new generation of people who read digitally. But this doesn’t mean that the printed book is under threat. The same thing happened with film; people thought it would destroy theatre, and then that television would destroy film. Now some people think that the digital book will destroy books, but both formats will co-exist,” he said.

Printed books still have a fundamental role in Cuba, and we have to see ebooks as an opportunity. We’re still not sufficiently prepared in order to make that transition, in technological terms. But what we need most is a change of mentality. Digital books open a huge variety of opportunities; the ability to add sound and images to a book and enrich the reader’s experience, and, if we are talking about improving the experience of a book and the reception of information, then that is a good thing,” Fernández Collado said.

“You can’t close the door on the technology that is becoming available. And there is a willingness to embrace that new technology,” he said.

As an example of a Cuban publisher doing exactly that, Fernández Collado points to Cuba Literaria, which has already made extracts of its author catalog available online, such as letters by Rainer Maria Rilke.

“It’s an open field, and the next step is to bring Cuban writers to markets where they have previously not been available. In this sense, the ebook is of phenomenal importance, especially with printing on-demand. Universities, for example, will be able to print as many copies as they need, which is an enormous cost saver for Cuban publishers in terms of transportation and distribution.”

Fernández Collado also pointed out that, by eliminating the need to print and ship books to multiple markets, Cuba will benefit by being able to provide works by Cuban writers to readers in other countries via online distribution.

Cuba’s most important export markets for books are Argentina and Mexico.

“We also have a lot trade with Latin American universities. Cultural exchange is very important for us. The value of a book is not gauged by its price, but rather the cultural value of its content. The maximum price of a book in Cuba is $1.50 US dollars, and the possibility that a book can reach markets outside Cuba is very important. A book’s cover price in Cuba will never cover its production and distribution overseas, but with ebooks we will be able to distribute to more markets, including the US,” he said.

All Cuba’s publishing companies are government-subsidized and are the recipients of funds to cover the raw materials necessary for printing and binding.

US Embargo is Damaging

But, as Cuban goods, books produced in Cuba are subject to the US trade embargo.

“The US trade embargo affects us much more than you can imagine. A US buyer comes to a book fair, for example, and buys books from every stand, but can’t buy from us because they are unable to take books published in Cuba into their country. So you ask the question, who is blockading whom?”

“If US Customs finds a US citizen with a book produced in Cuba, the book will be confiscated and the US citizen will be fined, the embargo therefore preventing people in the US from reading Cuban writers, both historical and contemporary,” he explained.

“Some publishers are keen to kill off the printed book, as if it were a mortally wounded person whom it would be kinder to let die. But the fundamental issue is content, and the way you access it, whether by using new technology or a traditional method. It makes no difference. The great themes of literature are the same and will not change, it’s the way you tell them, not the way you read them,” Fernández Collado says.

“With ebooks we can have a much wider scope of distribution, as well as a cheaper product, without the need for printing and binding. But global, digital distribution can bring other problems, such as piracy and author’s rights. But the perfect world doesn’t exist.”

“Readers realize that it would be beneficial to open our minds a little. Both formats, digital and printed, will co-exist, and it would be better if they can co-exist peacefully. But what we need to do is to ensure that digital technology can also satisfy the reader, and which must be beneficial,” he said.

“We have to see how new technology can satisfy a need, and make the most rational and optimum use of it. It has to be beneficial,” he added. “If you don’t adapt to new technology, you won’t survive.”