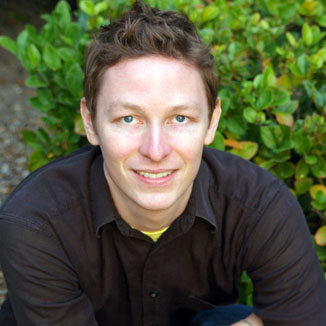 >Eliot Schrefer will be appearing at Publishing Perspectives’ conference “YA: What’s Next?” on November 28. Register online today. Eliot Schrefer is a contributor to The Huffington Post and a reviewer for USA Today, and has been profiled in Newsweek, New York Magazine, the New York Post, WWD, and on NPR’s “Leonard Lopate Show.” His books have been translated into Russian, Polish, Romanian, and German. His latest work, Endangered, was a finalist for the 2012 National Book Award in Young People’s Literature.

He is also, perhaps, the only NBA nominee to have been inspired, at least in part, by a pair of pants — Bonobos brand khakis to be precise. “I thought ‘bonobos’ was a nonsense word, but thanks to Google, I learned they’re one of the great apes. And so I started looking into what they’re about, and what I read caused me to fall in love — it was such an inspiring story of what our origins might be. Chimpanzees are brutal: they go to war against each other, constantly rape, but bonobos have this relatively peaceful culture, infants are kept safe because there’s a bond between mothers. I wasn’t thinking about writing about them, but then I realized the irony that their home is the place [the Democratic Republic of Congo] that’s the site of the worst war since World War II. And that’s when the book started coming together, and I knew it was something I wanted to write about.” Schrefer finds it amusing that no one seems sure how to categorize his work—“sometimes I’m in dystopia, sometimes I’m in thrillers.” But he sees hope for a rebirth of realistic YA fiction. “I think that in some ways we’re seeing a growth in gritty reality, in books like Endangered or Patricia McCormick’s Never Fall Down, where those same impulses that are being expressed in dystopian novels are placed in our world and in what’s going on around us now. It comes out in the plots that read like a fabricated dystopia but also happens to be real. There are a lot of reality-based thrillers coming out, and while the field is still dominated by the imagined world, I think the hunger for reality has been created by these imagined places.”