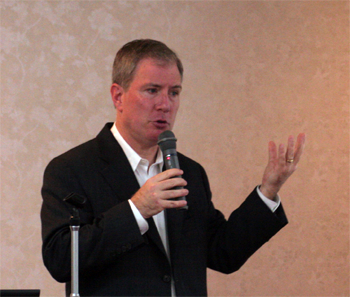 GUADALAJARA: Despite the thousands of books on display at the numerous stands, the e-book is the center of attention and debate at the Guadalajara International Book Fair, reflecting publishers’ and readers’ concerns about how technology is rapidly changing reading habits and the publishing industry itself. IDPF's Bill McCoy: “Publishers have to say, ‘it’s our content, at our price,’ and set a precedent.” (photo: ebookpro.jp)

Interest in the theme was tangible for the crowds queuing to attend a forum on e-books featuring Bill McCoy, executive director of the International Digital Publishing Forum (IDPF), and Pablo Defendini of Safari Books Online.

Addressing the piracy of downloadable content, the issue that most worries publishers, McCoy said he believes Digital Rights Management (DRM) actually serves as a temptation to individuals seeking to appropriate and distribute content, and that the solution is for publishers to make content as widely available as possible.

“Prices for downloadable content will come down and match that for videogames. We have to see content available for 99 cents and I don’t think we are far away from that. E-books retailing for $9.99 is already a reality in the US and Europe. Publishers have to realize that lowering prices on some titles will multiply sales and mean more readers, and they have to be open to an elasticity of demand, adapting prices to markets,” McCoy said.

“Publishers have to say, ‘it’s our content, at our price,’ and set a precedent.”

McCoy stressed the importance of collaboration between publishers and tech companies in order to bring books to readers via the greatest variety of devices, particularly as tablets become an everyday commodity, something which he predicts will happen quickly.

“There are already devices available in India that cost $40. This new availability of technology is a huge step, particularly for schools, as it will be cheaper to provide students with tablets than with textbooks, and which is already happening in the Philippines, for example, where state schools are beginning to teach with tablets.”

Addressing the mistakes that have been made so far in the shift to digital publishing in an attempt to prevent Latin American publishers from making the same ones, Pablo Defendini echoed McCoy’s disapproval of DRM as a deterrent of piracy, pointing out that DRM causes headaches for consumers and that, sooner or later, pirates will solve security issues and access protected content.

“Latin American publishers should insist on not using DRM,” he said.

He also highlighted the need for publishers to turn themselves into tech companies, as the current business model of outsourcing to software designers, who must create a digital archive for a book in a different format for every type of reading device, is unsustainable.

Furthermore, such process is hindering production, and producing content that is deficient, alienating readers, Defendini said.

“Many publishers send books to India to be digitized but the poor quality of some of them results in a bad experience for the reader, who is perhaps paying the same price as a printed book but receiving a poorer quality product.”

As well as creating their own digital books and apps in-house, publishers also need to realize the urgent need to create content that is adaptable to each and every device on which it will be read, he said.

“Texts need to be alive and adaptable in order to be accessible in as many formats as possible, depending on each reader’s needs.”

Rather than books being downloaded as a single archive and stored in an e-reader or phone, texts should be cloud-stored and, in the same way that a web page in ‘html’ adapts to the format in which it is read, adapt itself to a user’s requirements.

“Books must become APIs (application programming interfaces), stored on a server and providing a reader with what they require, depending on the way they read. For example, a Kindle user will receive plain text, while a reader using an iPad would be able to also receive the images or illustrations, and a reader on a computer would be able to print out the entire book,” he said.

But while the transition from publisher to tech company is both logical and necessary, Defendini identifies one immediate problem and major obstacle.

“Publishers need to find software engineers and pay them salaries that compete with Silicon Valley, given that personnel with the skills and know-how to work across multiple formats are much in demand, and, quite frankly, are likely to be tempted to work in projects that are more interesting than designing books.”