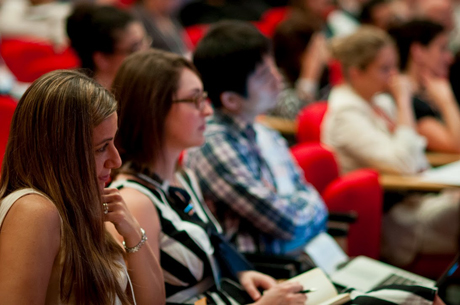 “The future of YA literature is directly and profoundly tied to the future of young adults,” said author Beth Kephart during her keynote address at Wednesday’s YA Publishing Conference, as she extolled the virtues and emphasised the importance of young adult fiction that does not just entertain, but empower.

The conference, organized by Publishing Perspectives and co-hosted by Scholastic, drew authors, publishing professionals and journalists together to answer the titular question: “what’s next?” And while the future of YA publishing was much discussed, panels covered everything from the very definition of “Young Adult,” to recent sales trends and demographics, and even the rise of the “new adult” literary genre.

In her opening remarks, Scholastic’s Trade Publishing President Ellie Berger cautioned that the next big thing was more than likely not to be found in Scholastic’s auditorium, but in the mind of a possibly-unknown writer simply trying to write a great story. “The next big thing always starts with something small,” said Berger. “And whether a story is presented in pages or pixels, paper book or multi-format, it is first and foremost a story.”

That sentiment — that no matter the current hot trend, or format, or multi-platform tie-ins, it all comes down to telling a really good story — was repeated often throughout the day.

Another of the conference’s recurring themes was YA’s ability to transcend age groups; in a short presentation, Bowker’s Carlo Kulo noted that most YA readers were not actually teens. Between August 2010 and July 2012, the majority of YA purchasers were over 18, and Kulo reported that the staff of a Boston bookstore had said that most of the customers who inquired there about YA titles were middle aged. And Bowker’s statistics also indicated that these were not adults simply buying the book for their kids — all age groups have been buying increasingly for themselves.

With seemingly more adults reading YA than teens, one has to wonder, then, what exactly makes it “young adult.”

“A great story is a great story,” said Aimee Friedman, Senior Editor at Scholastic, during a panel discussion about the difference between YA and adult books. “At its core a YA novel is a story about teenagers, from that perspective, but it can have broad appeal and range.”

The panel, which included the Elizabeth Perle, editor of The Huffington’s Post Youth Network, and Dan Weiss, Publisher at Large with St. Martin’s Press, along with Beth Kephart, was largely in agreement that the distinction was one of perspective. YA seems no longer bound by strict genre lines or pegged below a certain benchmark of quality — Kephart noted that YA novels are taking “more risks than ever with voice, structure [and] form,” and Weiss argued that the generally high quality of YA writing, coupled with increased interest on the part of adults, is facilitating a “leveling of the difference between high and low culture.” Friedman, commenting on the ever-growing trend of YA moving beyond the safe and vanilla, pointed out that Fifty Shades of Grey started as Twilight fan fiction. Indeed, the YA picture has gotten somewhat murky.

“A single genre classification system is probably no longer relevant to a modern teenager,” suggested Perle.

YA’s somewhat nebulous nature, the sheer variety of media formats and social platforms, and teens being busier than ever present real challenges to marketers, publishers and anyone else keen on reaching out to them. Two separate panels grappled with these issues. In the first, Stacy Lellos, VP of Marketing for Scholastic Trade, insisted on the importance of bookstores, social media and, especially, schools for reaching teens, while Larissa Faw, Editor at Youth Market Alerts, emphasized the need for engagement and tie-ins on multiple formats. The panelists all agreed, however, that it has to start with a great story.

In a later panel, Jake Katz, Creative Architect at YPulse, stated that co-creation of content, or leveraging the power of the pack, is a significant next step for YA publishing, while Julie Hochheiser Ilkovich, of Alloy Entertainment, discussed the potential power of building a two-way relationship with brands through shared content creation and curation.

The day’s final panel posed a simple, and familiar question: what’s next?

“No one ever knows,” said David Levithan, author and Editorial Director at Scholastic. “That’s why you keep looking. If you’re worth your salt, what you’re looking for is not the next trend, it’s the next great book that could start a trend.”

Francine Lucidon, owner of The Voracious Reader Bookstore, suggested that instead of seeing one colossal, global blockbuster, we may see a multiplicity of things happening in a number of niches and markets. Doris Jahnsen, of German publisher Oetinger Verlag, opined that it may be time for publishers to focus less on mega-hits and go back to just trying to publish really good books.

Eliot Schrefer, author of Endangered, touched on the emergence of “new realism,” which emphasizes immediacy, empowerment, survival and inspiration, from the dystopian phenomenon. “Rather than going deeper into the speculative realm, it’s about finding real world correlatives to fantasy pleasures.”