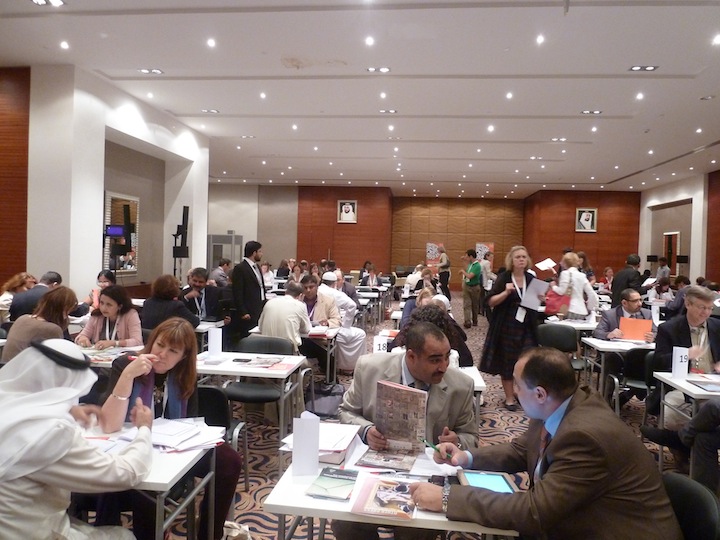 SHARJAH: Is the Sharjah government’s approach an argument in favor of state intervention in the book trade? The 31st Sharjah International Book Fair(SIBF) got underway last week, beneath the heat of the UAE sun, and as the 140-odd international publishers, agents, rights directors and scouts invited as part of the fair’s greatly expanded professional program that preceded it returned home to their, mainly cold, countries at the weekend, it’s worth asking the question and reflecting on what had just taken place and what it represents.

Flying in the Foreigners How many other governments would provide $3m for a national book fair, fly over so many industry professionals business class, put them up in five-star hotels and generally treat them like minor royalty? This year saw the fair’s first ever Chinese delegation, including the giant Phoenix Publishing group and the Muslim publisher, Yellow River, as well as the first delegates to come from Australia. Other paid-for guests making their first ever trip to the emirate included Cameron Drew of Kobo, Richard Charkin of Bloomsbury UK and Patrick Janson-Smith of HarperCollins. At this year’s fair there were more than 920 publishers all-told, from 63 countries and all five continents. No one should be in any doubt about the seriousness of Sharjah’s aims.

The commitment to books by the emirate’s ruler, His Highness, Sheikh Dr Sultan bin Mohammed Al Qassimi is unique. It represents massive state investment in the publishing industry — up to 60m AED ($60.3m) a year — and underlines Sharjah’s desire to be known as the emirate most dedicated to fostering learning and culture. It seems he is keen too, on creating an environment in which private companies can flourish — the private mobile company Etisalat remains a prime sponsor of the fair and there are now 40 private companies that are part of the Emirates Publishers Association.

Such government support may sit uncomfortably with some Westerners whose natural default setting is one of cynicism. Yet ironically, some of these same observers will bemoan their own governments’ lack of funding for libraries and literacy programs.  Surely, even the most suspicious observer might agree that the UK’s libraries would welcome some of Sheikh Sultan’s “petrodollars,” as one put it, right now.

Perhaps not surprisingly (after all, who is going to bite the hand holding the business class tickets?), almost all the international guests responded positively. “This support is a very good idea,” said Milan Machacek, Managing Editor at Paseka Publishers in the Czech Republic. “Italy did something similar a few years ago, when the Italian Chamber of Commerce in Prague took some people to the Turin Book Fair. But it was nothing like this scale. The contacts I made then were very good, and it has been good to do the same here. It’s great that they’re helping people make those first approaches.” Brazilian agent Lucia Riff: "People have to go to a country themselves and learn how it is done in that country."

It was Brazilian agent, Lucia Riff’s first time too and she thought her own country could learn from it. “We couldn’t make such an enormous effort, but a smaller program would be appropriate. People have to go to a country themselves, to have their eyes opened and learn how it is done in that country.”

Turkish agent Ayser Ali was among many who said that they would not have come had it not been for Sharjah’s financial support. “It would be too expensive. This is a very good opportunity for foreign publishers to meet Arab publishers. People here are very interested in Turkey’s mix of old and new, of being a Muslim country that is also modern. We have seen a big increase in Arabic tourism to Istanbul.” French agent Emmanuel Bonnet of the mouthful that is Mon Agent et Compagnie said it was admirable that Sharjah was “spending the money on books, not on arms, and it is very good that they care about literacy among the children so much.”

Yet one mustn’t become too starry-eyed. Just down the coast, the ruler of Abu Dhabi was meeting UK Prime Minister David Cameron to discuss the possible purchase of some more Typhoon war planes. But that was Abu Dhabi, where the world’s largest arms trade show and the Abu Dhabi International Book Fair are often held in close temporal proximity. As those who have met the Sharjah Sheikh know, he is a book man at heart. He loves to tell people about his own, personal library and he announced at the fair the donation of 4,000 antique titles from his own collection to the Egypt Scientific Institute, in recognition both of its position as Guest of Honour this year, but also to replace some of the titles that were lost during disturbances in the Arab Spring.

Nor is the Sheikh unaware of the changes sweeping the industry, as was evident in his speech at the opening ceremony. “The evolution of digital books has grown rapidly in recent years, and has an increasing role in the dissemination of artistic and intellectual creativity,” he said. “We believe that the publishing houses in the UAE and our region should keep up with this new revolution and innovate attractive ways to display paper books and digital books to encourage readers to buy books and read them in whichever way they prefer.” French agent Emmanuel Bonnet: It's admirable that Sharjah was “spending the money on books, not on arms,

Once again the SIBF is providing a translation grant for any deals begun while the fair runs, and the match-making sessions during the professional program were crowded, bustling affairs — a cross between a rights souk and a school parents evening, with rows of numbered tables. Lisa Milton of the UK’s Orion did a deal for two more Lauren St John children’s titles to children’s publisher Kalimat straightaway and had expressions of interest in at least another half-dozen titles. She also bought one title. “It’s a different way of doing business here, where face to face is even more important. I think if everything we’ve discussed comes off, I may have sold around 12 titles.”

George Pantsios of Greek publisher Patakis sold a novel to a Syrian publisher “who was very keen to get the translation grant. But for me it hasn’t been about deals — it’s been about the conversations you have and the new friends you make. I’ve seen people here that I wouldn’t see at other fairs.”

There have already been some 350 applications for translation grants, according to Fair Director Ahmed al Amri, who was rightly thrilled. “That’s an incredible figure, and that is after two days,” he said, shortly after escorting His Highness on his opening tour of the fair, which this year boasts an extra hall. “Our aim is to make the fair even bigger. We want to make it the hub for international publishers to meet.”

Pushing for Professionalization, With Help

With each passing year, the SIBF comes closer to fitting that description. Sharjah is now a professional, international fair, one that maintains its Arab roots but is opening the door ever wider to the cross-fertilisation of ideas between East and West. Al-Amri’s vision has been crucial here, but it is worth noting too, the important role that London PR company Midas has played — and continues to play — in shaping the fair and helping it grow. This work is arguably worthy of one of the Bookseller’s Industry Awards, for it is over and above mere publicity — though that is important too, of course — but is more about consultancy, about advising the fair on what it needs in order to grow internationally.

In particular, Midas MD and CEO Jacks Thomas continues to work tirelessly to keep the Sharjah name to the fore all year round, arranging speakers and author programs and keeping the fair firmly on the publishing map. She is passionate in her belief in the SIBF. “The fair is Ahmed’s vision and achievement and we’re delighted to support him,” she says. “It’s now unrecognisable from four years ago when I first came. The Arab world has a long and distinguished history of book fairs and I think it is important for the SIBF to maintain its Arab flavor. There would have been no point imposing a western way of doing business. I think of the people on the professional program as pioneers. They come with an open mind and an interest in how another culture works, and they learn that meeting face to face, building relationships and winning trust is how it works here — and they learn how mutually beneficial that can be.”

DISCUSS: A True Princess of the Publishing Industry