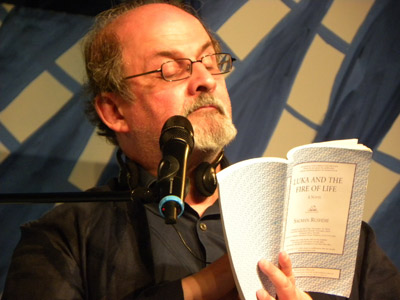 A fifteen year feud between Salman Rushdie and John le Carré has ended after both authors publicly lamented their disagreement, The Guardian reports. While speaking at the Cheltenham literature festival last month, Rushdie stated that he admired le Carré as a writer and wished they had never sparred. Le Carré, meanwhile, said in a recent interview with the Times that the feud was over, and that “if I met Salman tomorrow…I would warmly shake the hand of a brilliant fellow writer.”

The war of words began after the publication of Rushdie’s novel The Satanic Verses. The novel’s depiction of the prophet Muhammad led Iran’s Supreme Leader Ruhollah Khomeini to issue a fatwa calling for the author’s death, and at the time le Carré was highly critical of Rushdie’s decision to portray the prophet.

Le Carré explained to the Times: “My position was that there is no law in life or nature that says great religions may be insulted with impunity.”

After le Carré later drew accusations of anti-semitism, Rushdie chimed in, telling The Guardian that he had no sympathy for le Carré’s plight. Le Carré’s assertion that Rushdie twisted the truth to suit his own needs then led Rushdie to flatly declare le Carré a “pompous ass.”

The battle is now over, with both writers expressing regret for the lengthy war of words and admiration for the other’s work. According to The Guardian, Rushdie described Tinker, Tailor, Soldier, Spy as “one of the great novels of postwar Britain,” while le Carré told the Times that he admired Salman for “his courage…and his stand.”

Le Carré remained ambivalent, however, about the fundamental question from which the feud grew.

“Should we be free to burn Korans, mock the passionately held religions of others? Maybe we should—but should we also be surprised when the believer we have offended respond in fury?” le Carré wondered. “I couldn’t answer that question at the time and, with all good will, I still can’t.”

Via The Guardian, The Times