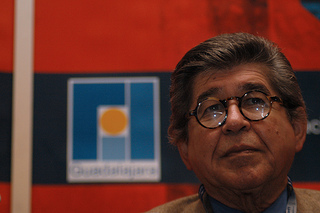 When Michel Houellebecq acknowledged lifting certain portions of his novel Prix Goncourt-winning novel La carte et le territoire from Wikipedia, it elicited little more than a shrug from the French.  But when Jonah Lehrer fabricated quotes for his bestseller Imagine and was revealed to have repeatedly plagiarized himself and others, he was pilloried in the press and lost several prestigious writing contracts.

Plagiarism plaguing authors isn’t just an isolated phenomenon, but every culture reacts differently. Now, with the awarding of this year’s $150,000 FIL literature prize, one of the Spanish-speaking world’s richest and most prestigious, to Peruvian author Alfredo Bryce Echenique (b. 1939), fierce debate has erupted that has divided writers and critics across Latin America.

The 2012 International Book Fair (FIL) in Guadalajara, Mexico, announced the winner of its annual Literature Award in Romance Languages on September 3rd. But Echenique’s journalistic career has been tainted by allegations of plagiarism, prompting numerous calls for the writer to renounce the award. The issue is whether a writer’s canon comprising both fiction and journalism should be considered as a whole when under appraisal for a literary award.

The accusation dates back to 2009 when the writer was fined $57,000 by Peru’s institute for the protection of intellectual property for having plagiarized 16 articles by 15 different writers. The writer has said he appealed the verdict and has been reimbursed, claims disputed by other authors.

In the wake of the FIL’s announcement, a group of 12 Mexican writers, including Soledad Loaeza, Antonio Azuela and Gerardo Esquivel published an open letter in which they described the decision to award the prize to the Peruvian writer as “unacceptable.”

Writing in a blog in the Mexican magazine Nexos, the group said: “Plagiarism is the improper and illegal appropriation of the effort, work, ideas and creativity of another,” disqualifying the decision to award the prize to Bryce Echenique.

In an article entitled The Ethics of a Profession published in the Mexican newspaper Reforma, Mexican author Juan Villoro joined the attack on the jury’s decision: “Plagiarism is the literary equivalent of doping in sport. Does a footballer that won the World Cup but tested positive in 16 other matches for doping deserve the Golden Ball? Of course not.”

“What is at stake, more than the reputation of a writer with an accomplished career, is the way in which culture is disseminated in Mexico,” he said.

His compatriot and fellow novelist Fernando del Paso, who won the FIL award in 2007, agrees, pointing out that, while the quality of Bryce Echenique’s work cannot be denied and is deserving of any prize, it is not possible to separate the Peruvian writer’s works of fiction from his journalism, and called for the jury to be replaced entirely ahead of the 2013 award.

The case is reminiscent of a similar scenario in 2011 when Mexican writer Sealtiel Alatriste admitted charges of plagiarism and renounced the Xavier Villarrutia Prize, which he had been awarded for a novel and an essay.

But other writers have come to the Peruvian’s defense, even outnumbering the calls for Bryce Echenique to renounce the prize, arguing that the appropriation of reportage as a journalist pales in comparison with the writer’s output as a novelist, and provoking the debate as to whether journalism and authorship remain inextricably linked, and whether a writer’s work, in whatever genre, should be considered separately.

Also writing in Nexos, Mexican novelist Guillermo Fadanelli said: “Having plagiarized a few articles is something I would not venture to condemn from my position as a writer. Plagiarism is a crime and whoever commits it must answer to the authorities and the victims, but not to a literary tribunal. To demand that the FIL prize be withdrawn (from Bryce Echenique) for having committed a minor crime (compared with the vastness and importance of his work) is an exaggeration.”

“Beyond the accusations against him, the prize is being awarded in recognition of his narrative work and the relevance it has acquired during more than four decades in 20th century literature.”

With the jury’s decision deemed final, the director of the FIL Prize, Dulce María Zúñiga, presented the award to Bryce Echenique at his home in Peru, in possibly a damage-limitation exercise that saves the writer a trip to Guadalajara to receive the award in person in order to avoid a further critical backlash.

The book fair, to be held November 24 to December 2, is Latin America’s most important publishing and literary event, and has been held annually in the western Mexican city since 1986. The 2012 edition will bring together more than 1,900 publishers from 43 countries. Chile is this year’s guest-of-honor nation.

Look for regular updates from the FIL here at Publishing Perspectives starting at the end of the month.

DISCUSS: Can Fraudulent Writers Ever Be Redeemed?