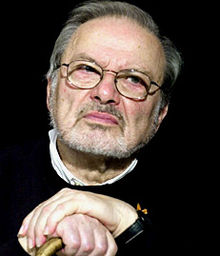 In an interview with The Believer shortly before his death in May at the age of 83, legendary children’s author and illustrator Maurice Sendak, never known for holding back his opinions, spoke out on a wide-ranging variety of topics, including sex, death, Homer, George Eliot and Daniel Deronda, anti-Semitism, his partnership of fifty years, his work, and the state of publishing. Some highlights: Maurice Sendak was critical of both publishing and e-books shortly before he died. (Photo: Wikipedia)

On why publishing has become “an outrageously stupid profession:”

Sendak: Well, nobody knows what they’re doing. I wonder if that’s always been true. I think being old is fortunate right now  I want to get out of this as soon as possible. It’s terrible. And the great days in the 1950s and after the war, when publishing children’s books was youthful and fun…it really was. It’s not just looking back and pretending that it was good. It was good.  And now it’s just stupid.

Sendak: Because of Rupert Murdoch. His name should be what everything is called now.

Believer: But he publishes you!

Sendak: Yes! HarperCollins. He owns Harpers. I guess the rest of the world, too. He represents how bad things have become.

Believer: Have you ever thought of leaving HarperCollins?

Believer: Is the problem with e-books partly a problem of color?

Sendak: Yes. Picture books depend on color, largely. And they haven’t perfected the color in those machines. But it’s not that. It’s giving up a form that is so beautiful. A book is really like a lover. It arranges itself in your life in a way that is beautiful. Even as a kid, my sister, who was the eldest, brought books home for me, and I think I spent more time sniffing and touching them than reading. I just remember the joy of the book; the beauty of the binding. The smelling of the interior.  Happy.