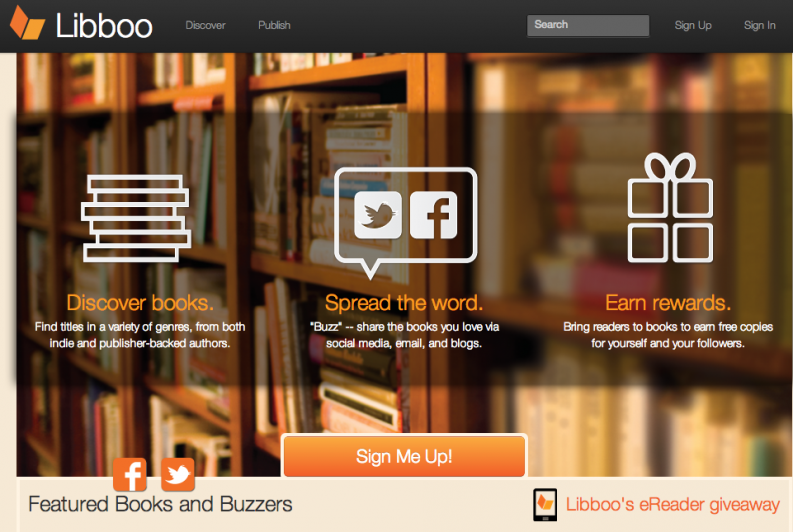 MediaBistro reports the launch of a new online book community site designed for avid readers who are also eager to share their favorite books: Libboo. Similar to GoodReads but with the addition of rewarding readers for sharing their opinions, the company’s goals are explained in detail on its site: “Libboo is a platform that connects buzzers (people who love to share and talk about books) with books they’ll enjoy, to create the next digital bestseller and help talented authors get discovered. Buzzers get rewards such as free e-books, and increase their influence by sharing great writing with their friends via social media, email, and other online channels.”

In addition, also according to the site, “During the pilot, we will be holding e-reader giveaways in November and December. Each of those months, the three buzzers with the highest Influence Meter score (calculated between the first and the last of the month) will receive an e-reader and a free digital copy of every book in the pilot.”

Libboo has just started an online pilot program with Houghton Mifflin Harcourt. The two companies, both based in Boston, have launched an additional three-month program that offers readers access to some of their books, and readers who share those books through their own social networks will then be able to earn free e-books. “Libboo’s unique platform allows our authors to share their work with an even wider audience using the power of social media,” said Gary Gentel, president of HMH’s trade and reference division.

BetaKit reported that the goal of the three-month pilot with HMH is to provide Libboo with feedback that will help gauge the effectiveness of identifying and using book advocates and influencers, and their ability to drive sales for publishers and authors. The company then hopes to use that feedback to leverage the platform for new and emerging authors. The company has currently closed its new author submissions, but they’ll be opening it up to new authors in the future.

“We’re working to innovate in the publishing space by identifying and engaging the publishing world’s top influencers. And the way that we’ve done it initially is that we’ve gone out and surveyed those who when they talk, people listen, as it relates to books and recommendations,” reports Jason Freedman of Libboo. “Our secret sauce in terms of our technology, which is being able to identify specific influence and how that affects individual decisions in regards to book buying and interests by enlisting the author’s biggest fans to share their books with the world.”

The company currently provides all of its services at no upfront cost, with the author retaining their copyright, and it requires no exclusivity contracts. As the pilot continues and Libboo collects feedback, it will be looking to cultivate a monetization strategy.