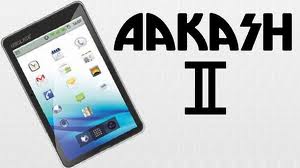 DELHI: The second version of the cheapest tablet in the world — Aakash — was launched by Pranab Mukherjee, President of India, earlier this month. The tablet, subsidized by the Government of India for college and university students, is a more advanced version from the first one that was launched in October 2011. Like its predecessor, the Aakash-2 is also Android-based, but is now equipped with a 1GHz processor, 512 MB RAM and a 7-inch capacitative touch screen, and runs on Android 4.0 ICS operating system. It promises a battery life of three hours.

The tablet is produced for the Government of India by UK-based company, Datawind, which sells a commercial version of the same device, under the ‘Ubislate’ brand. The Aakash will cost the Ministry of Human Resource Development Rs 2,263 ($41) per unit, but is subsidized 50% for students and made available at Rs 1,130 ($21). The commercial version of Aakash-2 is Ubislate 7Ci, available at Rs 4,499 ($82).

When the Aakash (the word means “Sky” in some Indian languages) was first launched last year, it was pegged at $35, making it the cheapest tablet in the world, and held the promise of revolutionizing content delivery for higher education, and providing internet connectivity to millions of students. In the approximately one year between the launches of the two versions, the tablet landscape in India has changed remarkably.

The subsidized Aakash-2 and its commercial version though cheaper than a number of tablets falling within the Rs 4,000–Rs 7,000 ($73–$120), will compete with other locally produced devices. Budget tablets (of varying screen sizes, processing power and internal memory) produced by manufacturers like Zync, Fujezone, Byond, Lava, Micromax, iBall, Karbonn, and HCL have flooded the market. Even the government-owned telecom giant, BSNL launched the T-Pad series of tablets, which have done modestly well.

When the first prototype of Aakash was unveiled in 2010, the government had expressed its desire to connect 25,000 colleges and 500 universities through it. Slow speed and poor battery life were among the main drawbacks spotted when the tablet was launched in 2011. Added to this, the demand by far outstripped the supply of both, the subsidized and commercial versions of the tablet, leading to massive delays in product delivery. Barely a few hundred devices reportedly reached the students.

To complicate matters further, just a few months after the launch, Datawind’s manufacturer, Quad Electronics, sued the company for non-payment of dues. The Indian Institute of Technology (IIT), Rajasthan — entrusted by the ministry with the task of procuring the tablets — was accused by Datawind of blowing up the technical problems, and for intellectual property violations. The fiasco led the government to take the project away from IIT Rajasthan and hand it over to IIT Mumbai.

Although many firms from all expressed keen interest to produce Aakash-2, the government retained Datawind to develop it. The tablet, with new specifications, has been tested at the premier IIT Mumbai.

It is unclear if this new version will reach students immediately. According to news reports, the tablet is currently being used to train teachers for adoption in classroom teaching. Students of engineering courses will enjoy the privilege of being the first recipients of Aakash-enabled classroom lessons. It is also reported that around 20,000 units will reach students within the week of this launch, and 220 million students across the country will get the device in the next 5–6 years.

The low-cost tablet device for students has caught attention of governments worldwide in the last year. In January, Datawind claimed to be in advanced-level talks with the governments of Brazil, Thailand, Turkey and Sri Lanka. The Government of India recently observed that India could soon produce low-cost tablets for exporting.

In May 2012, Thailand launched a $32.8 million project, the One Tablet PC Per Child campaign. It purchased 400,000 Scopad (SP0712 model) tablets priced at $81 per unit, from Shenzhen Scope, a Chinese company, for distributing among primary school students in the country.