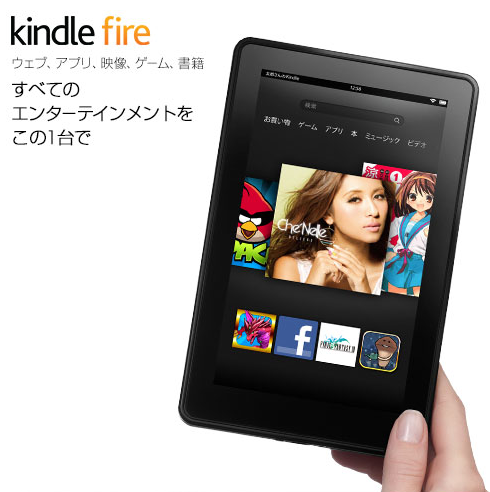 Without Amazon launching Kindle in Japan, publishers would have continued to digitize at a snail’s pace.

TOKYO: On October 24, Amazon finally announced the official launch of its Kindle in Japan, and the shipment dates of four of reading devices now supporting Japanese language. Devices on sale include the Kindle Paperwhite (Wi-fi version priced at ¥8,400 or $104; 3G at ¥12,800) and the 7″ Kindle Fire (standard version for ¥12,800 and the HD for ¥15,800. These devices go on sale on November 19th and December 19th respectively. As for the availability of Japanese titles, Amazon claims, modestly, to offer “tens of thousands of a wide variety of books including newly published best-selling titles and comics” and “more than ten thousand free books including Japanese literature classics.” October 24th was, perhaps not coincidentally, also the date that Apple announced its much rumored iPad Mini. In Japan, the launch of Amazon’s e-reading platform has been rumored repeatedly since 2008 and reported by major newspapers since early 2010 with changing dates — Q4 2010, Q1 2011, year end 2011, spring of 2012, etc. People have been waiting with anxiety, one might even say dread, as the arrival of the Kindle would mark the true beginning of the “era of open, digitized publishing” in Japan.

Amazon likely learned a lesson from Rakuten/Kobo’s botched launch a few months ago, which ended with users disappointed and frustrated by technical troubles and the poor availability of titles, both in quality and quantity. With Amazon, we can assume a few challenges have been met: 1) the testing of Wi-Fi/3G connection with the new Kindles has been completed; 2) Japanese-language functionality with Mobi/KF-8 have been verified; and 3) the availability of a certain number of Japanese titles has been assured.

Network connectivity has never been a problem, even with Kindle 3, and all the Japanese-specific functionalities are already defined clearly by the W3C and the IDPF (as HTML5/CSS3 and EPUB3 standards respectively) and implemented as WebKit, which is available for use by Amazon for those who need reliable translation from EPUB.

The only uncertainty might be the availability of a significant number of titles. Amazon has nothing to do but wait for the titles to be provided by the publishers. Many publishers still have to work out digital rights issues with their authors. But the bigger issue is conversion: since publishers hold their existing titles in XMDF and/or Dotbook formats, they are not immediately available as EPUB3 for Kobo or for Kindle conversion. The complicated and confusing process of getting their books onto these new platforms entails additional costs and should be streamlined consistent with print book making. The question here is who controls the production. (But the answer to that would require another 1,000 words…)

As of October 25th, Kindle listed 71,403 Japanese language titles. Of these titles, 10,146 having been uploaded in the week prior — numbers that are close to those of Sony Reader Store and Kobo. It is unlikely that Kindle will be able to compete on title selection alone. Amazon’s competitive advantage likely lies with its great and reliable user experience, one that is similar to that available with Kindle worldwide. Features such as as multi-device support, simultaneous checking of availability in different formats (print, digital, used), an effective search engine and integration with Amazon.com will likely impress people enough for them to forgive the glaring absence of a vast number of valuable titles that should be there.

The problem with the limited availability of titles is that Amazon will take much time to resolve this issue and Kindle won’t be able to outdo its rivals in terms of available titles any time soon.

So, why exactly did Amazon launch its Kindle in Japan now?

As such, I believe the timing was decided with both local and global considerations in mind. To paraphrase John Donne: “No BOOK is an island, entire of itself. Each is a piece of the continent, a part of the main.”

A frequent contributor to Publishing Perspectives, Hiroki Kamata is the editor and publisher of E-book 2.0 magazine.

DISCUSS: Is Being First Into an International E-book Market Ever Best?