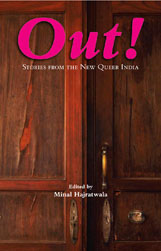 Writing in The Guardian, The Women’s Blog author Jane Martinson looked at the new emergence of gay literature in India. Just three years ago, she points out, homosexuality was illegal in India, and stories about transgender Sikhs and motorcycling lesbians were left untold. But now, she says, emboldened by legal recognition and a rapidly growing gay rights movement, “queer Indians are starting to speak out.” And while threats from conservative religious activists against Salman Rushdie forced him to pull out of the Jaipur literary festival, Asia’s largest, the event’s first panel on queer writing caused little to no stir.

Since then, an anthology of gay erotica has hit bookstore shelves, HarperCollins India has published My Magical Palace by Kunal Mukherjee, featuring a gay protagonist, and this month will see the release of Out! Stories from the New Queer India, an anthology of thirty contemporary stories about being gay and Indian from publisher Shobhna Kumar and editor Minal Hajratwala, both lesbians of Indian descent. “For 20 years since I came out I’ve been reading every single thing I can get my hands on that’s queer and Indian, even marginally so,” said Hajratwala, who lives in the U.S.

Gay literature had been published in India, even before section 377 of the Indian penal code — a colonial law dating back to the British banning homosexuality — was overturned in 2009. But now the tone of the stories is very different. “After 377,” said Kumar, who began her company Queer Ink by mailing imported gay novels to customers wrapped safely in brown paper envelopes, “writers feel a lot more empowered to write their stories — even if some remain anonymous. They’re saying  ‘I’m here, I’m queer, and there’s nothing wrong with that.’ They are not victims.”

Regardless, it took Kumar six months to protect her authors by ensuring that the legal responsibility for the book’s content was with the publisher, not with the individual authors, should the work ultimately be deemed offensive under India’s indecency laws.  And even so. many of the authors still chose to remain anonymous.

“It’s a really exciting time in India to be queer and part of that movement,” Hajratwala told Martinson. “Every book is an artifact of its time, and this is real, tangible evidence that a vibrant queer community in India exists.”