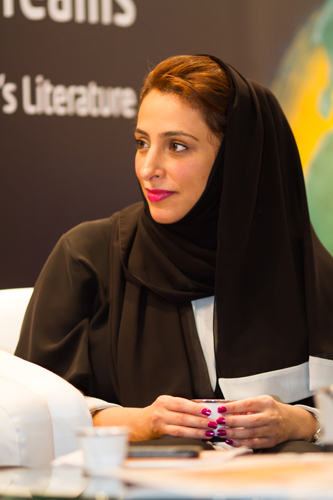 If it is Sheikh Sultan’s face that looms down from the sides of so many buildings in Sharjah, and from paintings in numerous lobbies, and throughout the halls of the Sharjah International Book Fair, his daughter Sheikha Bodour Al Qasimi is no less a presence in the emirate — a kind of princess of the industry in fact. She is universally liked and respected, perhaps because she has a down-to-earth natural manner, despite her privileged background. A former intern at Bloomsbury UK, she is the founder of children’s publisher Kalimat and also established the Emirates Publishers Association (EPA) in 2009, which received full membership — and full voting rights — of the International Publishers Association (IPA) last month. She is quite open about the negative reaction this move received from some members of the IPA.

“Some people questioned why an Arab country, especially the UAE, should be a member, but what I always say is that we’re a publishers association, we don’t represent the government. We represent the local publishers. If the IPA has issues with the government, that does not apply to the local publishers association. For example, Turkey is a member of the IPA and has been a member for a very long time. The Turkish government does horrendous things to writers if they write something against their country. The UAE is not like that.

“The UAE has freedom of expression. We can publish anything we want, we can write anything we want—there are just a few points that are in our constitution that say don’t disrespect other religions and don’t disrespect leaders. And that’s the only issue that the IPA had a problem with. So I say that we are here to lobby the government and to effect change—that’s what we do.”

She believes that you can’t put European laws on other countries, and that you have to be “culturally sensitive.” She notes that countries such as Thailand and India, and many parts of Asia, are members of the IPA, “but they still have cultural differences and laws protecting their publishing industry, so we have to make that distinction. I’ve been telling people at the IPA and the people I meet at international book fairs that we’re doing good things here, promoting literacy, promoting a publishing industry — all of that is important.” But she admits that the region does need more Arabic bookshops to balance the English-language dominated Kinokuniya and Magrudy’s, and that local publishers need support. “We’re not making a lot of money, we’re barely covering our costs, barely making it year to year. But we all believe in what we’re doing and so we’re just moving on until the industry can support itself. It’s going to take time, but everything is falling into place nicely and I believe that in the next couple of years we’ll see some changes”.

Over coming months she wants to work with the members of the EPA to increase the number of locally published titles in United Arab Emirates. “This will cost money — many of these publishers are small — so we’re looking at bringing in private companies in to support that. The other thing we want to do is encourage people to become publishers. I think there’s a lot of skepticism. People are worried — why should I be a publisher? Is it a good career? Is it a good business to go into? We’re working on some plans for people to think of publishing as an opportunity. So hopefully next year we may be able to announce 20 new publishers in the EPA perhaps.”