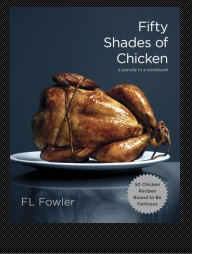 Fifty Shades of Grey: It’s been the inspiration for countless (and still counting) spoofs (among them Chelsea Handler’s upcoming 50 Shades of Chartreuse: This Time It’s Personal from her own A Chelsea Handler Book/Borderline Amazing imprint of Grand Central Publishing), spinoffs, classical record albums, and multiple stories here at Publishing Perspectives. And now, just in time for the holidays comes a new spin-off, a new story for us that nobody could have seen coming: Fifty Shades of Chicken: A Parody in a Cookbook. Yes, a Fifty Shades cookbook. Written by FL Fowler (an obvious nom de plume if ever there was one), the book traces the adventures of one Miss Chicken, a young, free-range bird, from “raw innocence to golden brown ecstasy,” who, just like Anastasia Steele, finds herself at the mercy of a dominating man, albeit a wealthy, sexy, and very very hungry chef.

Among the recipes in the book: “Chicken with a Lardon,” “Mustard Spanked Chicken,” and “Dripping Thighs.” Published by Clarkson Potter, it will be released (or unleashed) on the public on November 13.