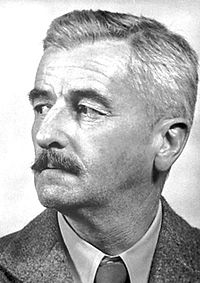 Last week in Mississippi, Faulkner Literary Rights LLC filed a series of claims seeking compensation and damages from roughly 100 people and companies who, it claims, have profited from an illegal misappropriation of the Nobel Prize winning author’s words.

First among equals of the defendants is Woody Allen, whose Academy Award winning 2011 film, Midnight in Paris, was targeted because of a line quoted by Gil Pender, the character played by actor Owen Wilson. “The past is not dead!” he says.  “Actually, it’s not even past. You know who said that? Faulkner. And he was right. And I met him too. I ran into him at a dinner party.”

Faulkner’s estate claims that Allen should have asked permission for the phrase to be used. It is also, according to The Independent, “peeved” that Allen misquoted Faulkner’s original line, from his 1950 novel, Requiem for a Nun, which reads, “The past is never dead. It’s not even past.”

The estate seeks “damages, disgorgement of profits, costs, and attorney’s fees” from the film’s distributor, Sony Picture Classics, and up to 100 as of yet unnamed exhibitors who profited from screening the film.

The second lawsuit, filed against Northrop Grumman Corp. and The Washington Post, is for using another Faulkner quote in a newspaper ad by the defense contractor. The quote, which says in part, “We must be free not because we claim freedom, but because we practice,” is from a passage from a 1956 essay Faulkner wrote in Harper’s Magazine, criticizing the South’s response to school integration.

Sony says that the quote is “fair use,” meaning that the user doesn’t have to license or pay for it.

“This is a frivolous lawsuit and we are confident that we will prevail in defending it,” a Sony Pictures spokeswoman said in a written comment.

The Washington Post reported that David Olson, a Boston College law professor who specializes in patent law and copyright, agreed that the Faulkner estate is over-reaching legally. “Commercial use isn’t presumptively unfair,” he said. He said no one watches Midnight in Paris as a substitute for buying Requiem for a Nun.”

“The Faulkner estate’s interest is not being harmed in any way,” Olson said. “If anything it draws a little more interest.”

But Lee Caplin, who represents the estate, disagrees with that assessment. He said that these are the first lawsuits it has ever filed, and pointed out that the estate recently licensed a quote to the hit sitcom “Modern Family,” comparing that to Allen’s use of the quote in the movie.

“He just wanted to kind of take it and he felt entitled,” Caplin said of Allen.

In an interview with a newspaper in Mississippi, Caplin said that Faulkner was “never about money,” but would have appreciated being consulted before companies profited from his work.