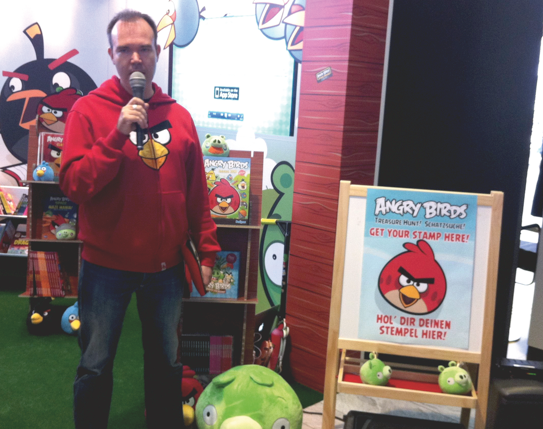 “We’re looking for millions of downloads of this book…We’re going for massive, massive volume.” The print version of the book, which Rovio published last year, goes by the same title, but the app is “not just a book,” said Peter Vesterbacka, Angry Birds CMO. “We took the content from the book, 41 egg recipes, but didn’t want to just take the book, make a PDF and sell it to people. We actually made it a lot more interactive.”

Bad Piggies’ Best Egg Recipes is on sale in the iTunes store for an introductory price of $0.99 or €0.79 (an Android version is expected soon). The app includes step-by-step photo instructions, an egg timer and photos of the finished dishes. Users can also upload their own pictures of the recipes they make. A Chinese-language version of the app, featuring some additional recipes and photos, will be available in the Chinese app store soon.

“Look at the implications of Rovio getting into the book business,” Vesterbacka said. “With ‘Angry Birds’ the game, we have built the biggest distribution format on the planet…For us, it’s very, very easy and very fast to cross-promote the book in all our games. We’re not looking for thousands or tens of thousands of downloads,” he continued, “we’re looking for millions of downloads of this book…We’re going for massive, massive volume.”

On pricing, he said, “there’s no reason why you should price book applications any differently [from other kinds of apps]. There’s no reason why something should cost more just because it happened to be a book before it turned up on one of these digital platforms.” So the app is $0.99 for now — it will later go up to $4.99 — while the print version of Best Egg Recipes is $9.99 on Amazon.