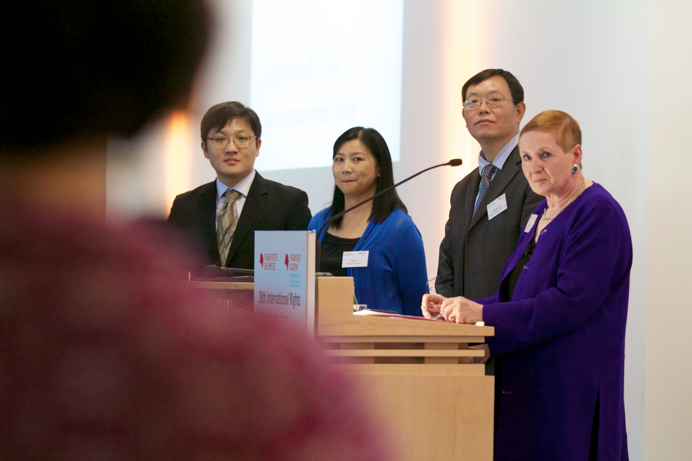 “Times are hard,” Diane Spivey, Rights and Contracts Director at Hachette’s Little, Brown Book Group, acknowledged in her introduction at the 26th annual International Rights Directors Meeting at the Frankfurt Book Fair. “To continue to grow, or even hold our own, as publishers, we are having to work harder and go farther to get the income.” In many cases, foreign rights deals are less than lucrative — “how do you justify a €750 or $300 deal?” Spivey wondered — and publishers are “inevitably chasing money [with] lots more admin and, you could argue, lots more hassle…We may have to accept that we replace one €10,000 deal with ten €1,000 deals.” Yet the changing world of rights also offers new opportunities for publishers who are willing to seek them out. One country that can be particularly challenging, but also particularly rewarding, is China — the largest publishing industry in the world, and the focus of this year’s meeting “This market more than pays off the time and effort if you are willing to invest in it,” said Lynnette Owen, Little, Brown Book Group’s Rights & Contracts Director.

Wuping Zhao, VP of Shanghai Translation Publishing House, outlined the lucrative opportunities for foreign publishers who want to sell translated titles in China. There are 580 state-owned publishers in China, he said, with 70% of those based in Beijing and Shanghai. The number of foreign rights acquired from foreign countries has increased greatly: Chinese publishers acquired rights to 15,592 foreign titles in 2011, up from just 1,664 in 1995. The increase is thanks to the market opening up slightly, as China’s General Administration of Press and Publishing no longer controls the publishing of translated titles directly.Today most publishers have translated titles on their lists, Zhao said.

While many Chinese publishers are still reluctant to buy foreign rights, Zhao said — preferring, for example, to translate public domain titles — some books are just so popular that Chinese publishers rush to bid for them. One good example is E.L. James’ blockbuster Fifty Shades of Grey. A Chinese publisher bought the rights before realizing how much of its graphic content would need to be deleted in accordance with Chinese censors. As a result, the book has not been published in China yet, and it’s unclear when that will happen.

Gray Tan, owner of the Grayhawk Agency, discussed the differences between China’s two language markets — the traditional character/complex language market, which encompasses Taiwan, Hong Kong and Macao, and the simplified language market of mainland China. (The best way to think of these two markets: think of them as UK and U.S. English, but with more spelling differences.)

Tan also provided a brief overview of China’s mobile e-book market, which can often seem confusing to foreign publishers. China Mobile, one of two major telecom providers in China, is the country’s largest e-book platform. Publishers may be reluctant to sell foreign rights to China Mobile, as it takes a huge cut of sales — at least 50% and sometimes as much as 70%—and sells the e-books at a 90% discount from the print price. “These terms sound really bad,” Tan said, but China Mobile has such a large user base that if a book becomes a bestseller on the platform, “we might be talking about six-figure U.S. revenue.” And, he suggested, “if your e-book clause says you can’t sell an e-book with a price under 50% of the print edition—you might want to modify that clause” in order to work with China Mobile.