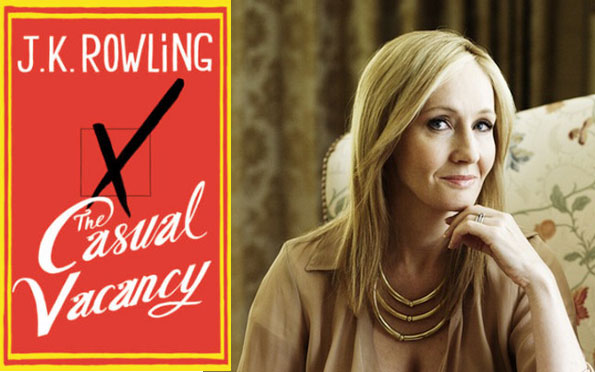 It opens with a sudden death, “Then pain such as he had never experienced sliced through his brain like a demolition ball. He barely noticed the smarting of his knees as they smacked onto the cold tarmac” and ends one more near death, two deaths and a funeral. In between there’s teenage sex, drug addiction, poverty, class and race, a restaurant opening, unhappy marriages, more sex, self-cutting, and small town political squabbling. It’s J.K. Rowling’s new “adult” book, The Casual Vacancy. And no, we’re not at Hogwarts anymore. Or are we? It’s a book that’s gotten decidedly mixed reviews, from Michiko Kakutani’s “the real-life world she has limned in these pages is so willfully banal, so depressingly clichéd that The Casual Vacancy is not only disappointing — it’s dull,” to Malcolm Jones’ “[Rowling] knows down in her bones how to make you keep turning the pages, no matter how old you are. And she is convincing. The dark vision at the heart of The Casual Vacancy may appall you, but it is not easily dismissed.”

The Casual Vacancy does take its time getting started, as Rowling slowly lays down the cast of characters while demonstrating the connections that bind the residents of the small, seemingly idyllic town of Pagford to each other as well as with those in the larger, poorer, neighboring factory city of Yarvil. But once she has set the table as it were (and I confess to having a slight difficulty keeping all the relationships straight at the beginning), the book builds and builds and what seems at the start to be a charmingly comic vision of life in a British small town grows into something altogether more dark and disturbing.

It’s a world where husbands and wives are fighting with each other, parents are fighting with their children, the children are fighting with each other, every house has its secrets, and the town’s website is used for anonymous political attacks in a vicious campaign to win the dead man’s seat on the parish council. It’s a world where the wife of the town’s leading citizen, Shirley Mollison, upon seeing Dr. Parminder Jawanda dressed in a sari for a church funeral, thinks “if she and Howard went to the temple, or the mosque, or wherever it was that the Jawandas worshipped, they would doubtless be require to cover their heads and remove their shoes and who knew what else, otherwise there would be an outcry. Yet it was acceptable for Parminder to flaunt her sari in church.” It’s a world that sets rich against poor, and every man (and woman) out for themselves.

It is a landscape, as Jones points out, in which “almost everyone we meet is wretched or miserable in some way or other. But extravagantly so — hence the comedy.” But comedy of the blackest sort imaginable. Rowling, I think, sees all of her characters coolly and straight-on; and while the “villains” of the piece, the Mollisons are perhaps the most fully drawn (and are much missed when not around), it is apparent that Rowling’s deepest sympathies are, perhaps not surprisingly, with the book’s young people.

For they’re the ones who bear the burden of their parents’ faults, and who are all trying, in one way or another, to escape the bleak realities of their lives. And at the end of the book it’s their failures, the over-the-top villainy of the Mollisons and the intersection between the two, that sticks with one. In fact I’m honestly surprised — two days after finishing it, the book is still with me, as I replay it in my head and appreciate just how well Rowling told her story. Call it what you will — an English provincial story, a dark comedy, a cunning mixture of Grace Metallious, Charles Dickens, and Anthony Trollope (all of whom came to mind while I was reading), or simply Harry Potter without the magic (the Mollisons are not exactly unlike Harry’s Muggle family) — I thought the book was a terrific read. And while I loved the Harry Potter books to a fault, I look forward even more to seeing where this new adult Rowling goes next.